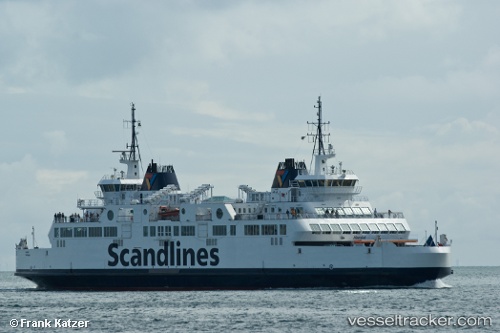 On Aug 22, 2018, at 1 p.m. the "Hamlet" allided with the quay in Helsingborg during the mooring manoever. The bow of the ferry was damaged. Only one of the 113 passengers on the ship suffered a slight arm injury, though the impact was so powerful that bottles and other objects rolled over. Because there was a bulge at the ship's book visor, it was no longer watertight and had to be repaired overnight. Scandlines initially reduced traffic on the Helsingör-Helsingborg route. At 2.30 a.m. on Aug 23 the ferry returned to service.

As of 1 December, HH-Ferries will increase its capacity on the 20-minute Helsingör-Helsingborg shuttle service by extending HAMLET’s sailing schedule. The decision is taken following demand from freight customers and after a long period of strong growth. HAMLET will operate five extra hours per day which will see the offered capacity being increased by 40,000 freight units per year, totalling 450,000 units per year. “Over a longer period of time, we have seen growth in freight traffic, and over the course of the most recent eight weeks the growth rate has exceeded 8%. Our freight customers are satisfied with Öresund’s floating bridge, and the expansion is part of our ongoing work to maintain the necessary capacity and the right service level. We want to offer on-time departures at all times,” said Johan Röstin, CEO of HH-Ferries AB. https://www.shippax.com/en/news/hh-ferries-to-increase-capacity-between-helsingor-and-helsingborg.aspx

On July 18, 2013, the "Hamlet" was withdrawn from service after it had bumped into the quayside in Helsingborg. The ship was transferred to Landskrona for repairs of some damage suffered in the allision. It was hoped the ship would be back in service on July 19. No one was hurt in the accident. The "Mercandia VIII" was inserted to replace the "Hamlet".