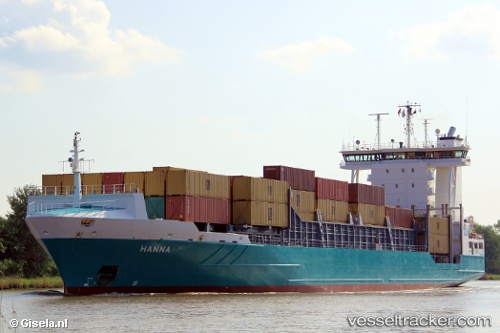 On Dec 29, 2022, at 2:13 a.m., the'Hanna', en route from Le Havre to Bassens, lost three containers over board 23 nautical miles west of the island of Ouessant. The loss was reported to the CROSS Corsen which deployed a Cayman helicopter of the French Navy at daybreak to relocate the containers. The emergency tug 'Abeille Bourbon', pre-positioned in Stiff Bay, was also tasked to look for the lost cargo. At the same time, Urgent Notice to Mariners No. 635/22 was issued by the Atlantic Maritime Prefecture. As the containers could not be relocated during the first overflight, the CROSS Corsen engaged a Beechcraft maritime surveillance aircraft of the French customs in the early afternoon in addition to the tug which was still in the area. The maritime prefecture of the Atlantic has given formal notice to the shipowner to put an end to the danger to navigation posed by the containers.

After having laid up for more than two years in Lübeck, the "Hanna" left the port again on Feb 27, 2016 at 10.05 a.m., escorted by the tug "Simson", bound for Landskrona where she will be overhauled before starting a new charter contract in the Baltic Sea. German reports with photos: http://www.luebeck-port-diary.de/index.php/berichtevomtage/2016/02/27 http://www.ln-online.de/Lokales/Luebeck/Kuecknitz/Goodbye-Die-MS-Hanna-darf-endlich-weiterfahren