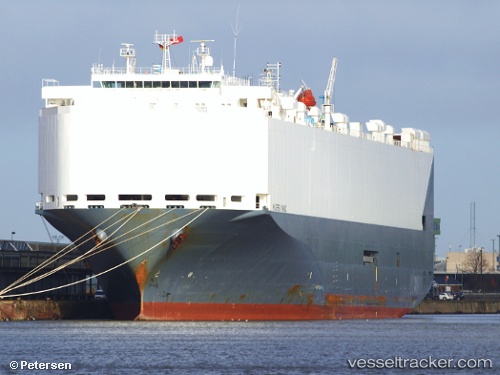 Hoegh Osaka was 'unstable' when it left Southampton port

A cargo ship which became stranded in the Solent for 19 days after developing a severe list was "unstable" when it left port, a report says. The Hoegh Osaka ran aground in January 2015 on its way from Southampton to Bremerhaven carrying high-end cars. A "significant difference" between the actual and estimated cargo weight left it unstable and contributed to the accident, marine investigators found. Owner Hoegh Autoliners said no one person could be blamed for the error. "There were a number of circumstances here. We cannot put responsibility on one individual or group," a spokesman for the shipping company said. The 51,000-tonne vessel, which left Southampton on 3 January 2014 at 20:06 GMT, was "rounding West Bramble buoy in the Solent when it developed a significant starboard list, causing some cargo shift and consequent flooding", the Marine Accident Investigation Branch (MAIB) report said. http://www.bbc.com/news/uk-england-hampshire-35823182?SThisFB

An interim report into the grounding of the "Hoegh Osaka" off East Cowes on Jan 3, 2015 has been released by the Maritime Accident Investigation Branch. The report confirmed that at 9.09 p.m., as the Hoegh Osaka was rounding West Bramble buoy in The Solent, it developed a significant starboard list causing some cargo shift and consequent flooding. With the list in excess of 40°, the ship lost steerage and propulsion, and subsequently drifted onto Bramble Bank, grounding at 9.15 p.m. The draft of the investigation’s final report has been sent to stakeholders for a 30 day period of consultation and will be published by Mar 2016.

Last of the cargo removed from parking areas

The last of around 1,200 Jaguar and Land Rover vehicles of the "Hoegh Osaka" were being removed from parking areas at Southampton docks and was going back to Jaguar Land Rover at the end of this week as mystery continued to surround their future fate. The condition of the JLR cars - along with 65 Minis and one Rolls-Royce Wraith as well as 105 JCBs - was unknown following the deliberate grounding of the ship after it developed a severe list when leaving the Port of Southampton in January. BMW confirmed the Minis remained undamaged. The cargo, valued according to estimates between GBP27m (US$40m) and GBP35m, was destined for initial stops in Bremerhaven and Hamburg, followed by several more ports of call in Middle East destinations such as as Bahrain, Kuwait, Jeddah and Jabal Ali (Dubai). Meanwhile the "Hoegh Osaka" was back on the Hoegh run and currently sailing through the Strait of Gibraltar before heading for the UK. It was due back in Southampton on Apr 25. The owners were now waiting for a report from the UK Marine Accident Investigation Branch (MAIB) which could be any time within a year from the time of the incident itself.