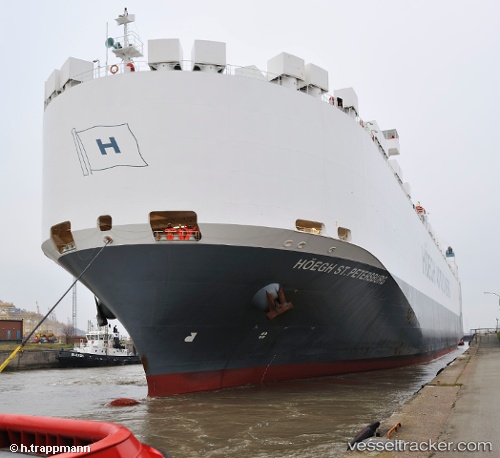 IIn the morning of Sep 20, 2022, the 'Hoegh St. Petersburg', n route from Tanger-Med to Port Elizabeth, requested the urgent medical evacuation of a 54-year-old Filipino crew member due to a possible cardiovascular problem 59 miles from Maspalomas. The CCS Las Palmas mobilized the SAR helicopter Helimer 206, which hoisted the patient and transferred him to the Dr. Negrín hospital.

Mumbai Port sets new record of shipping over 6,100 cars on a single ship

MUMBAI: The government on Tuesday said that Mumbai Port has set a new record for shipment of automobiles on a single ship. According to the Ministry of Shipping, Mumbai Port set the new record by shipping 6,316 cars on a single cargo vessel on its new berth "OCT-2". "This is a quantum jump over the previous record of shipment of 5,376 cars," the ministry said in a statement. "The ship M.V. HOEGH ST PETERSBERG berthed on 6th August 2016 and sailed on 9th August 2016 with 6,316 cars' shipment mainly consisting of 3,115 cars of General Motors and 3,093 cars of Volkswagen and exported mostly to Mexico." http://auto.economictimes.indiatimes.com/news/passenger-vehicle/cars/mumbai-port-sets-new-record-of-shipping-over-6k-cars-on-a-single-ship/53733394

The "Hoegh St. Petersburg", with a Filipino crew of 20, arrived in the area in the night of Mar 20 and used lights to search overnight before resuming a visual search after daybreak. The had searched a strip of ocean stretching about 100 nautical miles using binoculars and unaided eyes. The ship, which was transporting cars, was on its way from South Africa to Australia. Another commercial ship and an Australian navy vessel were also en route to the search area. Three Chinese naval ships were heading to the area, along with the icebreaker "Snow Dragon". The icebreaker was in Perth following a voyage to the Antarctica in January, but it wasn’t clear when the other ships would get there.