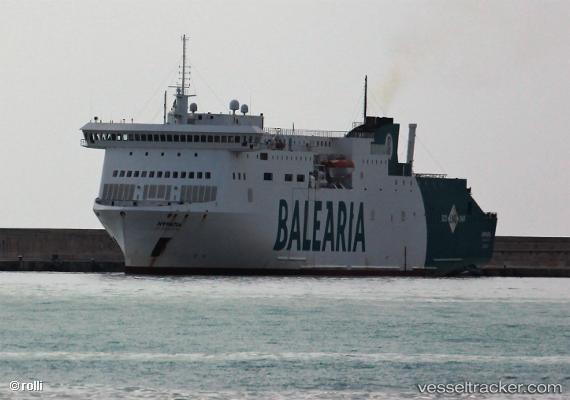 On Sep 12 the last two of four trucks, which had toppled aboard the "Hypatia de Alejandría" early on Sep 11, were righted again, so that the 38 trailers bound for Ciutadella and vehicles which had remained trapped on the car deck could be unloaded. On the whole about 40 vehicles aboard the ship suffered damage during the storm ride with waves of 6-7 meters. The ship left the Dique del Oeste on Sep 12 at 6.40 p.m. and headed to Barcelona, arriving there at 12.40 a.m. The ferry company was meanwhile critzised for not having secured the trucks properly and having headed the ferry into the storm. 253 passengers, 75 cars and 77 trucks were traveling on the ship. The trucks that have overturned were heading to Alcúdia. Reports with photos: https://diariodetransporte.com/2019/09/vuelcan-3-camiones-en-un-buque-que-cubria-la-ruta-barcelona-alcudia-ciutadella-fotos/ https://www.mallorcazeitung.es/lokales/2019/09/12/schwierigkeiten-lkw-bergung-mallorca-fahre/71064.html

In the night of Sep 10, 2019, seveal vehicles and three trucks aboard the "Hypatia de Alejandría" toppled north of Mallorca in stormy weather. The ferry was serving the route Barcelona-Alcúdia-Ciutadella and headed to Palma after the incident, where the heavily damaged cars were to be removed. At 6.30 a.m. on Sep 11 the ferry berthed at the Multipurpose Terminal in the eastern port of Palma. The vehicles of all passengers have been unloaded in the run of the day, and work was being done to lift the dumped trucks and remove the spilled contents to be able to remove them from inside the ferry. Passengers bound for Menorca have been able to travel with the fast ferry "Jaume III", which has departed from Alcúdia at 9:00 a.m. Baleària has lamented the inconvenience caused to passengers and cargo customers. The "Hypatia de Alejandría" remained at the Multipurpose Terminal in the eastern port of Palma for the time being. Reports with photos and video: https://www.diariodemallorca.es/sucesos/2019/09/11/vuelcan-camiones-ferry-balearia/1447498.html https://www.mallorcamagazin.com/nachrichten/lokales/2019/09/11/73343/sturm-lasst-lkw-fahre-vor-mallorca-umkippen.html https://www.mallorcazeitung.es/multimedia/fotos/lokales/2019-09-11-168098-vuelcan-camiones-ferry-balearia-hypatia-alejandria.html

Baleària has inaugurated its LNG-ro-pax HYPATIA DE ALEJANDRÍA on the Barcelona-Alcúdia-Ciutadella line, boosting connections not only between the Spanish peninsular and the Balearic Islands, but as much the Balearic inter-island connections. This move is a great step forward particularly for the island of Menorca, the archipelago's second-largest island with a population of about 90,000. HYPATIA DE ALEJANDRÍA is the largest ro-pax which ever called the Port of Ciutadella at Menorca's western tip, and her inauguration required specific preparation including the acquisition of a tugboat. In order to allow the HYPATIA DE ALEJANDRÍA operating to Ciutadella, Baleària therefore purchased the newbuilt tugboat ROLON PLATA II from Damen Shipyards Group at the end of June.