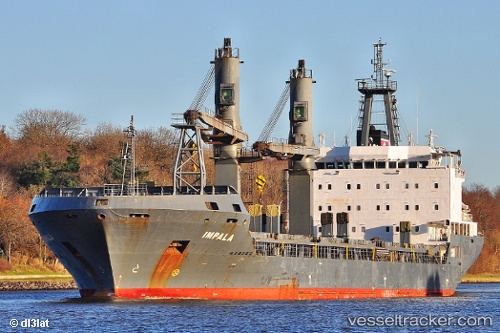 Firefighters rescued a man who fainted while working inside the "Impala" in the afternoon of Aug 18, 2019, at Port Everglades. The man, who suffered from heat exposure, was 50 feet down in the hold of the vessel. Workers were loading concrete when they stopped to report the medical emergency. Port Everglades station personnel moved quickly to treat the man with oxygen and intravenous fluids. The man was too weak to walk, so the agency's technical rescue task force used a ladder truck as a high point to secure the man onto a portable stretcher and lift him out of the ship. The rescuers brought him to safety dockside, where paramedics continued to treat him and took him to Broward Health Medical Center in Fort Lauderdale. At 11 p.m. the ship left the port, bound to Tallinn, ETA Sep 8. Report with photo and video: https://www.local10.com/news/local/fort-lauderdale/firefighters-rescue-man-from-belly-of-cargo-ship-in-port-everglades

The "Impala" started listing in position 049 48 0.9 N, 003 19 24.1 W, on March 16 at 12.30 p.m. The vessel intended to move closer to France to find shelter and dock with assistance from the shipping company. Previously, the vessel experienced issues with boiler, which was fixed earlier by the crew. The ship reached Cherbourg at 7.30 p.m. The vessel left the port of Cherbourg after repairs on March 28 at 8 p.m. and headed to Gebze, Turkey, ETA Apr 8.

The "Impala", en route from Ijmuiden to Diliskelesi with a crew of 17 on board, suffered a problem with a pump and no water in boiler 15 miles southwest of Beachy Head Light, in position 50 29 55 N, 000 06 39 E on March 15, 2019, at 8 a.m. atThe vessel was carrying 10,340 metal slabs on board. The engine was stopped and the crew started investigating repair options with no time scale given at this time. On scene were SW winds of 6-8 Beaufort, increasing to severe gale 9 at times, the sea state was very rough. The ship headed to Cherbourg, ETA March 16, 9 p.m.