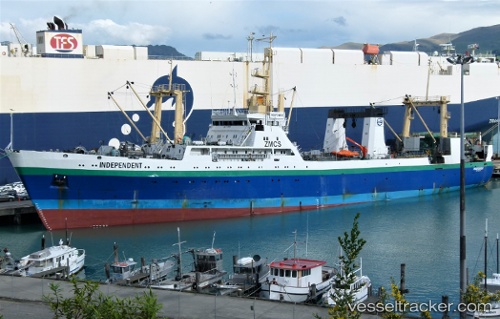 On Jan 8, 2020, a sick crew member has been plucked off the bow of the 'Independent' 80 miles off the coast of Canterbury in the South Pacific Ocean after suffering from a medical condition. He was winched off the vessel by a Westpac Rescue Helicopter crew which made the hour-long flight to the ship. The fisherman was now recovering in hospital. Report with video: https://www.tvnz.co.nz/one-news/new-zealand/watch-fisherman-winched-off-vessel-canterbury-coast-after-falling-ill

Damaged electrical cabling caused the fire on the "Desert Rose" at Lyttelton Port of Christchurch in the early morning of Apr 18. It was initially believed the fire was caused by sparks from a grinder or a welder, but it was found out that welding was only a contributing factor. The previous days some damage at the wiring has occurred, and using the faulty circuit caused a fire. All staff were discharged from hospital on Apr 18. Report with photos: http://www.stuff.co.nz/the-press/news/79116745/photo-shows-damage-to-desert-rose-fishing-trawler-after-fire-in-lyttelton

Fire on trawler in Lyttelton

In the aft section of the "Desert Rose" a fire broke out in the morning of Apr 18, 2016, at 8.15 a.m. The vessel was docked at hte west side of wharf 7 in Lyttelton, Christchurch. Six crew members were treated for smoke inhalation, four of them were taken to hospital, the remainder of the crew evacuated. 13 fire engines, among them six fire crews from Christchurch, five volunteer brigades and a number of specialist units, were deployed, and the fire was sbrought under control after several hours. The cause of the fire is being investigated but it may have been started by a spark from a grinder or welder. The "Desert Rose" had been in Lyttelton for about four months for a refit. Reports with photos and video: https://www.tvnz.co.nz/one-news/new-zealand/two-people-hurt-in-port-lyttelton-fishing-ship-fire http://www.stuff.co.nz/national/79022197/ship-on-fire-at-lyttelton-port