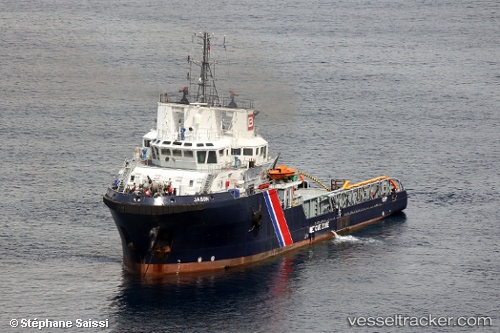 After two days of anti pollution work, the two slicks, initially 35 kilometers long, fragmented. In addition, since July 11, a drift generally towards the South was observed, which oscillated between five and 15 kilometers from the coast, evolving according to the sea currents and the weather. The search area on June 14 extended over ten kilometers with ten spots north of the Gulf of Porto-Vecchio. - To the north, the 'Jason' and the 'Mimosa' were deployed, each with a trawl; un the center, the customs vessel 'Libecciu' was working with a trawl; - To the south, the 'Pioneer' and the tug 'Altagna' were deployed with a trawl. They surrounded the area and joined at its center. A Civil Security Dragon 2A helicopter, a Falcon 50 of the French Navy and a Panther helicopter of the French Navy Panther have carried out numerous reconnaissance and guidance flights-

Thre pollution off Corsica continued to drift away from the coast in southern direction, while nearly four tons of oil have already been recovered as of June 13. The pollution was located ten kilometers from the coast, further south, north of the Gulf of Porto Vecchio, in the morning. Since sunrise, maritime resources are once again in the area to continue the recovery of hydrocarbons. Helicopters and planes were also dispatched to follow the evolution of the situation, identify and locate the slicks and rejust the devices, among them the 'Jason' and 'Pionnier'. The pollution was very fragmented, with one part emulsified, another sinking and another diluted. On June 12, a coastal protection plan with action on the coasts was activated. An investigation was opened by the Marseille prosecutor's office responsible for maritime pollution on the French Mediterranean coast. It was entrusted to the maritime gendarmerie which will have to try in particular to find the responsible ship. At this stage, three vessels were present in an enlarged area around the pollution and will have to be checked. Report with photos: https://www.nicematin.com/environnement/photos-quatre-tonnes-dhydrocarbures-lourds-recuperees-en-corse-apres-le-degazage-dun-navire-694866

On May 2, 2016, the "Jason" was mobilized from Toulon after the French 21-m-tug "Le Costaud”, 91 gt, (built 1972 AT & CH Ziegler Frères, Dunkerque) of the Coselev company, alerted the CROSS Med that the barge "Monica-B" with a length of 18 meters, being towed from Porquerolles to La Londe and situated between the island of Porquerolles and Londe les Maures, was threatened to sink due to water ingress. The barge was containing three cubic meters diesel oil and was listing 10 °. The CROSS Med immediately informed the center of naval operations at Toulon that mobilized a Dauphin helicopter of the Navy which took off at 11:45 a.m. for a reconnaissance and assessment flight; an assessment and intervention team was mobilized by the Maritime Prefecture of the Mediterranean. The “Jason" was diverted to the Bay of Hyères. At 11:30 a.m. the tug grounded the barge in a water depth of 2,70 meters 700 meters off the Badine Beach in the bay of Hyères. There was a thin diesel film of 60 m² around the barge which was treated by small boats of the Travaux Maritimes et Mecaniques (TMML) in Lavandou. At noon the tug “Laisse Dire” (MMSI: 228226600) of TMML was requested by the owner of the barge for the assistance in the salvage operation as a platform to conduct investigations by divers on the hull of the barge. The Maritime Prefecture was evaluating pollution control devices to be deployed to contain a possible oil spill. At 4 p.m. the barge was refloated and allowed to continue the journey to La Londe. French report with photo: https://www.premar-mediterranee.gouv.fr/communiques-presse/echouage-une-barge-large-plage-pauline-commune-hyeres-les-palmiers.html