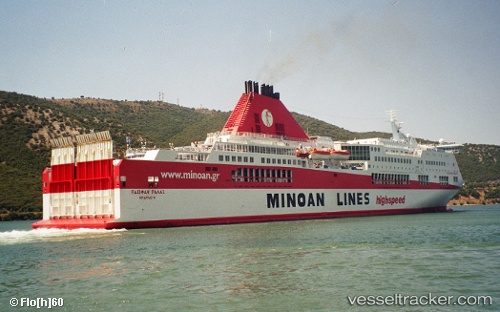 With ABB’s shore connection technology, three Corsica Linea ferries will cut emissions and noise pollution when berthed in the Port of Marseille, France, ABB says in a press release. Instead of running diesel-fueled auxiliary engines, Paglia Orba, Jean Nicoli and Pascal Paoli ferrieswill use electricity for power at berth. Each of the three vessels is being modified to feature ABB’s power compensation solution Dynacomp, which allows electricity available from the local grid in Marseille to be stepped down to 11KV in order to take care of ship power needs while in port. “ABB shore connection technology enables the type of emissions-free ship power that regulators, ports and local residents increasingly demand. With ABB’s proven technology, Paglia Orba, Jean Nicoli and Pascal Paoli will be emissions-free when berthed in Marseille,” said Ludovic Amouroux, Project Manager, Corsica Linea. “We estimate we will use between 7MWh and 11 MWh of zero-emission power per call, depending on the vessel.”

The "Jean Nicoli" should hopefully resume service on March 17 between Marseille and Corsica. After first repairs in Toulon, where she head berthed following the incident causing great damage to the wheelhouse, the ship moved to Marseille on March 10, where the repair works were continued. Most of the systems have now been restored but some equipment has had to be changed, including a radar.

Some hours after the "Jean Nicoli" left Marseille in the afternoon of Mar 6, 2017, at 4.30 p.m., being bound for Ajaccio, the ferry encountered gale force winds with speeds of 50 knots. The ship had sailed earlier than scheduled to avoid the bulk of the storm, but she was hit by a 10-meter wave 20 miles off the Hyères islands near Porquerolles, south of Toulon, at 10.30 p.m. When the wave crashed on the gateway, a window was smashed, and the following seawater ingress damaged navigational and engine control equipment. Without working radar and very limited in its ability to control the ship from the bridge, the "Jean-Nicoli" was then about 40 kilometers south of the Levant islands. The vessel aborted the sailing to Marseilles and headed for Toulon as the nearest port of refuge with low speed, arriving there in the morning of Mar 7. The CROSSMED was alerted and notified the Marifime Prefecture which deplyoded the tug "Ailette" of the French Navy as an escort to port. Two tugs assisted the ship to dock after the arrival at 2 a.m. The communications on board between bridge, engine and deck had to be carried out by VHF hand radios in the meantime. The ferry was finally berthed at the Fournel wharf around 3.30 a.m. The 50 passengers were safely disembarked. The ferry was then moved to the La Seyne cruise wharf for repairs. She was expected to return to its schedule start of next week. In the meantime the "Paglia Orbia" should took over the Ajaccio-Marseille link. On Mar 7 she was held in Marseille due to the storm and had to cancel the sailing Porto-Vecchio. The "Jean Nicoli" shifted to the repair yard Espace Joseph Grimaud in La Seyne sur Mer on March 8. The ferry left again on March 10 at 2.30 p.m. and returned to Marseille. She docked in the Président Wilson basin around 6 p.m. and has remained there since. French reports with photos: http://www.lemarin.fr/secteurs-activites/shipping/27936-une-vague-scelerate-endommage-la-passerelle-du-jean-nicoli http://www.nicematin.com/faits-divers/endommage-par-une-vague-de-15m-un-ferry-est-oblige-daccoster-plus-tot-que-prevu-119786