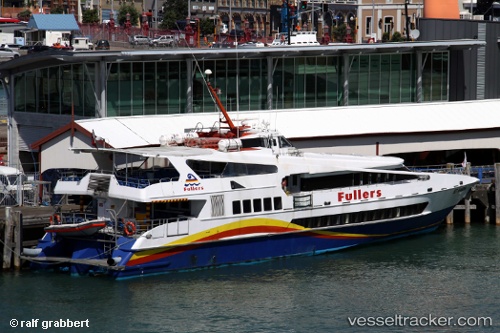 On the way from Waiheke to Auckland a fire broke out in the engine room of the "Jet Raider" in Islington Bay at 11.55 a.m. on Mar 20, 2016. The CO2 firefighting system was automatically switched on, and the fire was extinguished in seconds. 73 passengers and four crew on board were transferred to another Fullers ferry, the "Tiri Kat", and taken to Auckland. Five boats of the Coastguard also took fire service personnel to the stricken ferry. They determined the fire was out and the vessel was is safe, and the vessel was just waiting for a tug to come to tow it. Report with photo: http://www.newshub.co.nz/nznews/ferry-caught-fire-near-islington-bay-2016031914#axzz43NspFpee

A Transport Accident Investigation Commission report, released on Feb 5, 2014, said that a bolt failure caused two engine connecting rods to break free of the crankshaft of the "Jet Raider" and punch through the engine casing in Aug 2011. One ferry engine was so badly damaged in the accident on Auckland's Hauraki Gulf that investigators have been unable to pinpoint exactly why it failed. The 316 passengers and five crew had been transferred to a nearby boat after the starboard engine of the Fullers ferry Jcame to grief as it travelled from Auckland to Waiheke Island. The investigation found there was no fire but it was maybe a momentary flash-off of vaporised fuel and exhaust gas, and possibly steam, which set off fire alarms. There was no evidence of poor maintenance. The "Jet Raider" was being used as a standby vessel and had a low annual number of operating hours, and Fullers had not carried out the replacement of some engine components at the interval recommended by the manufacturer. But because the manufacturer would not explain the reason behind its recommendations it could not be said that contributed to the bolt failure. TAIC's investigation did find that only half the carbon dioxide fire suppression was used because the engineer, used to catamarans, only fired the starboard CO2 bottle into the engine room, forgetting that both engines were in the same space. Better signage about the fire extinguishers was needed, the TAIC said. Additionally, Fullers staff had not practised transferring passengers between different boats, and that training regime should be introduced.

The maritime safety authority is undertaking preliminary enquiries before deciding whether it will launch a full-scale investigation into the fire on the "Jet Raider" between Auckland and Waiheke Island on Aug 20, 2011, in the morning. Maritime New Zealand investigators are gathering information about what happened. The ferry company, Fullers, says it is also carrying out its own investigation to try and find the cause of the fire. It says the ferry will not be used again until that investigation is complete. The fire broke out in the engine-room of the "Jet Raider" about 11.30 a.m. The vessel was brought to a halt by the incident in the Motuihe Channel, just over halfway through its journey. Automated extinguishers put the fire out and the 316 passengers were transferred to another boat, an operation aided by good weather conditions, and taken to the island. The disabled ferry was then towed to shore so that firefighters equipped with breathing gear could use thermal imaging equipment to locate the source of the fire. Report with photo: http://www.stuff.co.nz/auckland/local-news/waiheke-marketplace/5538869/Ferry-passengers-rescued-at-sea