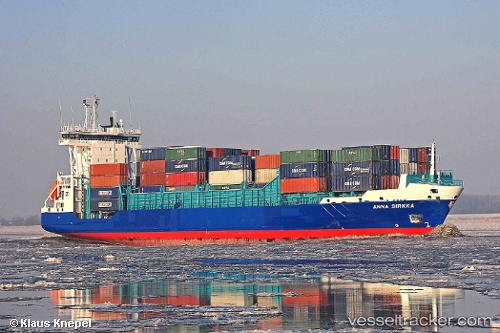 The "Joanna Borchard" entered Castellón as a port of refuge on Sep 12, 2019, at 5.30 p.m. after some containers on deck had shifted in the recent storm which raged the Mediterranean sea with wind forces of 100 km/h. Several container stacks before the bridge had toppled. The port of Castellón was closed but given the seriousness of the situation, access to the ship has been allowed. Consignee instructions were expected to act on the affected cargo. The ship had sailed from Salerno on Sep 9. It left Castellón again on Sep 16 at 9.30 p.m., bound for Leixoes, ETA Sep 20. Spanish report with photo: https://cadenaser.com/emisora/2019/09/12/radio_castellon/1568277781_669573.html

The crew of 14 of the "Joanna Borchard" saved the crew of two of a French yacht off Corsica after leaving Salerno on March 2, 2018, bound to Marseille, ETA March 4. The MRCC contacted the ship and reported that the yacht was distressed in the Strait of Bonifacio between Corsica and Sardinia. The ship diverted towards the given position and located the disabled 15-meter-boat an hour later in the evening of March 3. The yacht was drifting in rough seas already since five days. The sail had wrapped around the propeller. The "Joanna Borchard" approached the yacht and managed to get it alongside in the third attempt. Timewise it was thought about calling a helicopter due to the complicated conditions on scene with waves of 2,5 meters. When the container ship had the yacht at its lee side, the couple could board it via the pilot's ladder. Both were hypothermic and suffering from fatigue. The crew of the feeder managed to save some documents and belongings of the two, the yacht was attended. They were cared for and disembarked in Marseille on March 4 where medicals were already waiting. The feeder ship then proceeded further to Barcelona. German report with photos: https://www.tageblatt.de/lokales/buxtehude/buxtehude-artikel_artikel,-Dramatische-Rettung-aus-Seenot-bei-Korsika-_arid,1353720_pmcount,5.html

A Filipino sailor aboard the "Anna Sirkka" suffered an open finger fracture on Sep 6, 2ß15. The lifeboat "Vormann Steffens" of the DGzRS station Hooksiel droped off a doctor on the ship on Voslapp Roads in the morning in spite of stormy northwest winds of force 8 and waves up to two meters height. The injured was transferred aboard the lifeboat and taken to Hooksiel where he was delivered to medical services. The boxship was enroute from Bremerhaven to Hamburg.