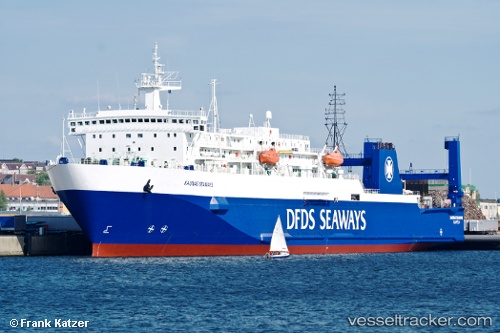 On Nov 1, the last six of a total of 12 migrants, who had been aboard the "Kaunas Seaways" for three months, were taken off the ship to be brought back to their homelands with airplanes from the Odessa Airport and Turkey. Six of the migrants were returned to Algeria on Oct 29, while the six others were currently on their way to Morocco. The migrants had boarded the ferry hidden in trailers with goods from Turkey on July 27.

Concern about stowaways after two months aboard

Expertes believed that the 12 stowaways aboard the "Kaunas Seaways" who have been locked in cabins for two months now, could be a danger to passengers and crew members. Neither Turkey nor Ukraine will accept the migrants who got illegally aboard in Turkey in the mistaken belief that the ferry would sail to an EU country and were not aware that it was sailing between Istanbul and Odessa. Lithuania, the flag state of the ferry, will not accept them either. DFDS has locked the migrants into cabins, welded grids for the windows and employed security personnel to protect crew and passengers. Some of the migrants have shown aggressive behaviuor, tried to set the cabins on fire and flooded them with water. They also threatened to jump overboard.

Tension aboard ferry with stowaways

Since nearly seven weeks, 12 migrants have been blocked on the "Kaunas Seaways". The situation is almost unchanged. Nobody will accept the stowaways, suspected migrants from North Africa who are blocked in cabins where they are guarded by Ukrainian security guards. There is a tense atmosphere on board the ship. The 12 men are desperate, but the captain and his crew are also under enormous pressure. They had internal fights, have smashed the doors to the cabins and have tried to put fire on the ship. And they are desperate to get out. They had detected that there was activity in the hallway, and then they started to hammer the doors. They shouted and beat to get out whocj obviously made the crew inconvenient, it was not meant to get so close to experiencing how desperate they are. At least four people are from Morocco and six from Algeria. Two of the people from Morocco have received a letter of passage. A passenger letter guarantees that the state issuing it will allow entry without a passport. The Lithuanian authorities are responsible for finding a solution, but the Danish Ministry of Foreign Affairs is also involved in the case.