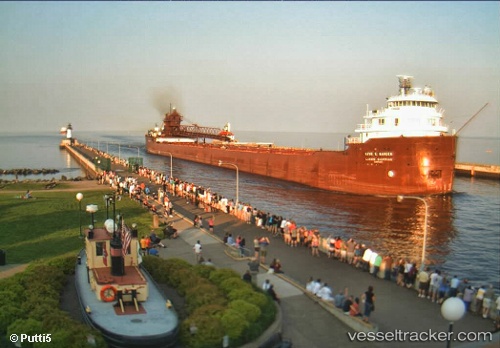 The "Kaye E. Barker" was stuck in compressed ice that surrounded it near Picnic Rocks on Apr 18, 2018. The vessel was freed and arrived at the Upper Harbor Ore Dock in Marquette in the morning of Apr 20. The Coast Guard Cutter "Mackinaw" had arrived in the morning of Apr 19 to break the ice around the vessel. Strong winds and high waves from the early week storm compressed the remaining ice cover between Marquette and Whitefish Bay. Report with photos: http://www.uppermichiganssource.com/content/news/Vessel-stuck-in-compressed-ice-near-Marquette-480261973.html

GREEN BAY, Wis. — Curt Cornell has worked at Green Bay's Hagemeister Park for six summers, but he'd never seen anything like what happened in the afternoon of July 16, 2017. A coal ship more than 700 feet long flattened a small boat that was tied up on the edge of the Fox River outside his restaurant, then struck the Ray Nitschke Memorial Bridge, putting it out of commission for roughly four hours. "The boat was coming in, we had a full patio, and everyone was taking pictures — the usual drill," said Cornell, Hagemeister's general manager. "We were in the piano bar and noticed the boat was really close. Then people just started screaming and yelling." As Hagemeister's patio full of stunned patrons watched, the ship Kaye E. Barker struck the CityDeck, left a 16- to 18-foot boat in pieces, and sent kayaks tumbling from the dock into the water. The Barker then smacked the Nitschke bridge. The incident, which happened about 3:30 p.m. CT, left the bridge stuck in the open position and forced city police to detour east-west traffic to the nearby Walnut Street Bridge. Crews were raising and lowering the bridge as of 6 p.m., but had not allowed traffic to cross. https://www.usatoday.com/story/news/nation-now/2017/07/17/cargo-ship-destroys-docked-boat-then-rams-bridge/483293001/#

Ice on Lake Superior forced the "Kaye E. Barker", which had left Duluth on Apr 2, 2015, to head for port with hull damage where it will transfer a load of iron ore to the fleet-mate "Lee A. Tregurtha" after ice punched a hole in the ship's forward hull. Minor flooding was controlled with pumps and temporary patching. The bulker then would likely head for repairs in Sturgeon Bay, Wisconsin, after stopping for inspections and unloading in Sault Ste. Marie on Apr 8. She was one of 10 ships the Coast Guard has been attempting for days to plow through a large ice field separating Whitefish Bay from the rest of Lake Superior. The Canadian Coast Guard sent the "Pierre Radisson", a heavy ice-breaker from Montreal, to join the three cutters jointly working the ice pack already. The heavy U.S. cutter "Mackinaw" was working the area, but in reduced capacity after one of the ship's azipod engines was damaged while working Whitefish Bay, limiting the vessel's power and turning ability. Since the locks opened March 25, a handful of ships have suffered some form of ice-related damage.