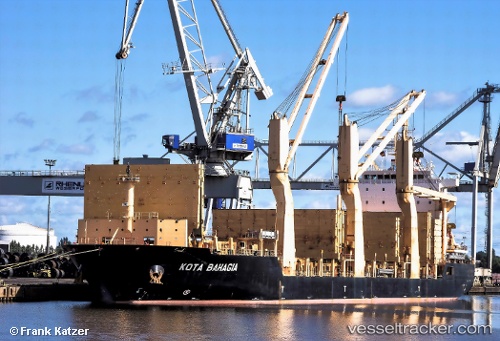 Confusion over the authority of a ship's master over his vessel in port has been identified as a factor in the fire aboard the 'Kota Bahagia' which broke out in the morning of Dec 18, 2922, and that took seven days to extinguish at Napier Port, during the unloading of wind turbine components. The port company was at the time holding its annual meeting at the Napier War Memorial Centre, less than a kilometre away but out of sight of the scene. The billowing black smoke led to a warning to homeowners on Bluff Hill and surrounds to keep doors and windows closed because of the risk of possibly toxic fumes. Ultimately, while four shore-based workers had been working in the hold gas-cutting to free braces fitted to keep the cargo in place en route to Napier, no serious injuries were reported during the outbreak nor the seven days before the fire was finally extinguished. The Transport Accident Investigation Commission inquiry's final report said molten material ejected during gas-cutting activities very likely ignited dry sawdust nearby, creating a smouldering fire that ignited the polyvinyl-chloride tarpaulins and other combustible components of the fibreglass-project cargo. Hot-work precautions were not fully implemented by the ship's crew. One of the two recommendations from the report was that ship operator Pacific International Lines take further steps to ensure the safety precautions prescribed in its Safety and Emergency Manual are implemented effectively on board its vessels.

The 'Kota Bahagia' has suffered massive damage in Napier Port on Dec 18, 2020, at the Higgins & Geddis Wharves. Napier Port was unable to say how long the ship will remain in port. Steel was twisted by the high temperatures of the blaze. The local cargo has already been discharged from the vessel, with the ship owner and cargo owners currently planning the removal of the remaining cargo. The investigations by the Transport Accident Investigation Commission (TAIC) and Fire and Emergency New Zealand (FENZ) were still ongoing. It was the responsibility of the Classification Society Lloyds to determine the seaworthiness of the vessel, on behalf of the ship owner. Report with photo: https://www.nzherald.co.nz/nz/massive-damage-to-inside-of-ship-that-caught-fire-in-napier-port-revealed/SPZR2GNY64LBS7GUHK6HRIXEXI/

Hold opened after cooling down

The Investigators and Fire and Emergency New Zealand on Dec 24 opened the hold of the 'Kota Bahagia' after it cooled down. At its peak, 12 crew members had worked to bring the fire under control. vessel was moved to a different area of the port so firefighters could complete their investigation, which was likely to take some more time. The Transport Accident Investigation Commission has opened an inquiry into the causes and circumstances of the fire.