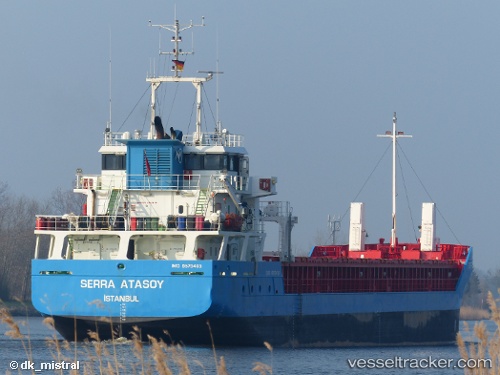 Disabled freighter under tow to Svendborg

The "Kryssholm" was troubled on Nov 30, 2018, in the Baltic Sea southwest of Bornholm, one day after its departure from Frederiksværk to Kaliningrad. The ship limped towards the northeast tip of the island and dropped anchor. On Dec 2 she was taken on tow by the Danish tug "Ronja" (IMO: 5111696), to be pulled to Svendborg, ETA Dec 4. On the last leg to port the "Birk" (MMSI: 219016144) assisted as stern tug and berthed at the Marstal Værft A/S at 10.15 a.m. She left the Svendborg port on Dec 21 at 11 a.m. for sea trials. The ship moored on Baltiysk Anchorage on Dec 27 at 9 a.m. on its way to Kaliningrad as first port of call after repairs.

The "Kryssholm" suffered a technical failure in the Aegean Sea north of Crete in the afternoon of Oct 18, 2018, while en route from Nemrut Bay to Ceuta. The tug "Christos XVII" towed the disabled ship to Souda, where she was docked at around midday on Oct 19, assisted by the tug "Christos XXV". The port authority of Chania arrested the ship until repairs and a class inspection were carried out. The ship sailed from Souda to its destination Ceuta on Oct 23.

Trials after repairs were completed

The tug "SD Shark" escorted the "Serra Atasoy", which had arrived in Rotterdam on Nov 11 under tow of the tug "En Avant 10" in Rotterdam due to propulsion problems, while the cargo ship left the port again for trails upon completion of the repairs on Dec 24 at 5.25 p.m., before resuming its voyage to Ravenna where it was being expected on Jan 7, 2014 now.