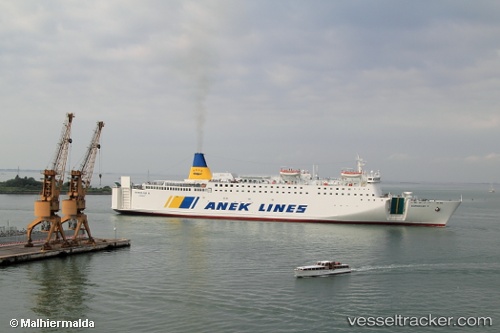 Ferry assisted in resue of crew of sinking catamaran

US Coast Guard air and surface crews and the crew of the 'Kydon' combined efforts to rescue two boaters from a sinking catamaran in the night of Dec 6, 2019, approximately 10 nautical miles north of Manati, Puerto Rico. Rescued were a man, French national, and a woman, U.S. citizen aboard the 36-foot catamaran 'Blue Cocktail', as it was traveling from the Dominican Republic to the British Virgin Islands. Watchstanders at Coast Guard Sector San Juan received at 7:24 p.m. Friday a mayday radio call from the 'Blue Cocktail', on VHF Channel 16, reporting the vessel was taking on water and rapidly sinking. Watchstanders diverted a Coast Guard Air Station Miami HC-144 Ocean Sentry aircraft, directed the launch of a Coast Guard Air Station Borinquen MH-65 Dolphin helicopter and dispatched a Coast Guard Boat Station San Juan 45-foot Response Boat-Medium to search for the boaters and any signs of the Blue Cocktail. Watchstanders also issued an Urgent Marine Information Broadcast UMIB to alert marine traffic in the area. The 'Kydon' received the UMIB and diverted to the area of the distress. Shortly after the initial distress call, the woman jumped on the dinghy which started drifting away from the catamaran, while the man stayed onboard attempting to control the flooding. The man was forced to abandon the vessel as it started to sink and became partially submerged. Upon arriving on scene, the crew of the HC-144 Ocean Sentry aircraft located the man in the water and the woman safely aboard the dinghy. The Coast Guard helicopter arrived on scene shortly thereafter and the aircrew vectored-in the Coast Guard response boat to the survivors’ position. The boat of the Station San Juan worked well with on-scene aircraft and with the Captain and crew of the 'Kydon', who gave them a good reference to where to start looking for the submerged vessel. Following the rescue, the survivors were transported to San Juan and transferred to Customs and Border Protection personnel with no medical concerns. Report with photo and video: https://coastguardnews.com/coast-guard-good-samaritan-rescue-2-from-sinking-catamaran/2019/12/07/

The ferry service between the Dominican Republic and Puerto Rico will be resumed by the "Kydon" on June 1 after the allsion of the ferry with the port wall at Santo Domingo. Repairs were carried out so far that a ferry service is again possible. However, the damaged ramps must still be replaced, as a repair was not possible at the Don Diego Cruise and Cargo Terminal. Until new ramps have arrived, the defective ramps remain closed. The loading and unloading can only be done on one side with the remaining two flaps. In four months, new ramps will arrive and replace the damaged ones.

In the morning of May 18, 2017, at 8.10 a.m. the "Kydon" operating between San Juan, Puerto Rico and Santo Domingo, allided with a quay of the Puerto Don Diego terminal at the port of Santo Domingo. The allision took place at the Francisco A. Caamaño Avenue, known as the Puerto avenue, during mooring operations. None of the passengers nor the crew were injured. The passengers left without problems one hour after the accident, although they complained because they could not take their luggage until further notice from the authorities. Dozens remained stranded at the port for hours. The ship had struck a wall and dragged some freight containers that in turn destroyed part of the fence of the port facilities. Several vans and containers standing on one of the interior routes of the port were demolished. Traffic on the road boardering pier was hampered by the destruction. The other operations of the port and those of the Caribbean Ferries remain normal. The ferry itself suffered damage at its ramp. The ship with a capacity for 1,750 passengers and 111 crew members, made its maiden voyage between San Juan and Santo Domingo only on May 3, after the route had been suspended since the fire on the "Caribbean Fantasy" in mid-August 2016 off San Juan. The "Kydos" was chartered by Ferries del Caribe for five years as a replacement. The accident was thought to have been caused by a mechanical failure so that the engine could not be stopped in time or due to a fault on the ship's ramp. The administration of Ferries del Caribe appointed a commission to investigate the accident. The engineering department of the Dominican Port Authority and the Department of Operations, in coordination with the General Inspector of the Port Authority, will carry out the investigation in preparation to repairs of the damage, together with the company San Souci Ports. Reports with photos and video: http://hoy.com.do/ferry-choca-y-se-lleva-contenedores-y-verja-perimetral-del-puerto-don-diego/ https://www.wapa.tv/noticias/internacionales/barco-de-ferries-del-caribe-choca-en-dominicana_20131122404725.html https://www.listindiario.com/la-republica/2017/05/18/466527/video-pasajeros-del-ferry-se-quejan-porque-no-recibieron-explicaciones-del-accidente http://www.listindiario.com/la-republica/2017/05/19/466570/ferries-del-caribe-designa-comision-para-determinar-causa-de-accidente-en-el-puerto http://www.cronicaviva.com.pe/republica-dominicana-buque-de-pasajeros-choca-muelle-tras-viaje-inaugural/ http://eldia.com.do/una-falla-provoco-accidente-en-ferry/ http://cdn.com.do/2017/05/18/videos-muestran-momento-colision-del-ferry-muelle-don-diego-empresa-investiga-incidente/ http://www.elcaribe.com.do/2017/05/19/atribuyen-accidente-buque-falla-mecanica