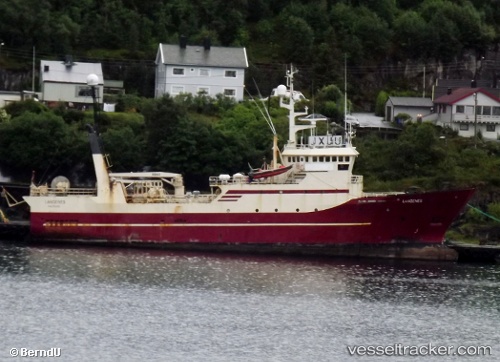 The "Langenes" arrived at the Fiskerstrand shipyard in Sula in the evening of Sep 16. In the morning of Sep 14 the tow had started from Stavanger by the "BB Server". The ship left the yard again and berthed in Søvik on Nov 20 at 8 a.m. Norwegian report with photo: https://www.smp.no/nyheter/2018/09/16/%C2%ABLangenes%C2%BB-framme-p%C3%A5-Fiskerstrand-Verft-17523976.ece

Trawler under tow to shore

On Sep 12 the "Langenes" was being towed to shore by the Coastguard cutter "Sortland" since 4 a.m. after the trawl was cut with burners, and dewatering pumps were in place after the ship had suffered water ingress around 7 p.m. the previous evening. The fire was brought under control after it was already isolated in the engine room and fire protection systems were activated, including the CO2 plant. Four of the six remaining crew members - among them the skipper, mate, mechanic, engineer, netman and bass - on board were taken off at 11.15 p.m. by a rescue helicopter during the night and transported to a nearby rig. The last two were still on board. The convcoy was heading for the Bokna Fjord, and it was estimated that it would take nine to ten hours as there was a stiff breeze with up to 28 knots wind speed in the area and it was challenging to tow the ship. The weather conditions also caused that the tow was continued with the Coast Guard and not transferred to a tug. The "Langenes" had just returned from a three-week stay at the Fiskerstrand Yard for classification works. By Sep 14, the tow has been transferred to the tug "BB Coaster" (IMO: 9502685). The convoy was underway to a yard in Ålesund, ETA Sep 16, 5 p.m. Norwegian reports with photos: https://www.nrk.no/rogaland/18-personar-evakuerte-fra-fiskefartoy-1.14203734 https://www.aftenbladet.no/lokalt/i/P3xPy7/Fisketraleren-som-brant-slepes-na-hjem-til-Alesund https://pbs.twimg.com/media/DnYMNfgWsAAkRUE.jpg https://pbs.twimg.com/media/DnYMNfuXcAANr2L.jpg https://pbs.twimg.com/media/DnYMNfnWwAEoBX3.jpg

On Sep 11, 2018, the "Langenes", which had sailed from Måløy on Sep 3, caught fire 75 miles off the Rogaland coast. The JRCC was notified at 3.03 p.m. 15 of the 20 crew members were evacuated by a rescue helicopter and a supply vessel. They were flown to Stavanger Airport at 4.45 p.m.. No injury has been reported, but a health check was made on arrival. The supply ships "Normand Naley" and "Viking Queen" as well as two rescue helicopters, one Sea King and one Super Puma, attended the burning "Langenes" west of Sola in Rogaland. On scene were 28 knots wind. The first helicopter was on scene at 4.10 p.m. It was assessed continuously if the last five men on board also would have to be evacuated. There was still heat development from the engine room, which had been sealed when the fire broke out. The remaining crew had activated the fire extinguishing system, but did not have fully control of the fire. The standby vessel "Far Sun" of a nearby oil rig remained close to the "Lanngenes". The helicopters were stood down for the time being. The arrival of the patrol boat "Sortland" of the Coastguard was announced for 11 p.m. Norwegian report with photo: https://fiskeribladet.no/nyheter/?artikkel=62333