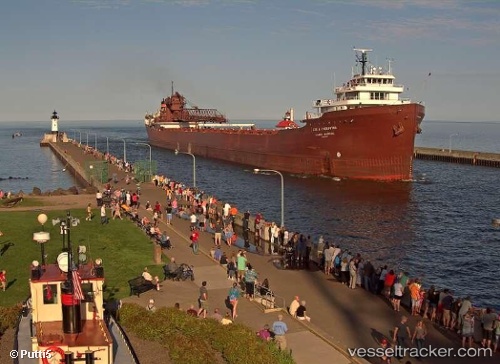 The "Lee A. Treegurtha" proceeded to the anchorage of Sarnia, Ontario, to make repairs on one of its main engines, on Nov 3, 2018. The ship arrived at Marquette on Nov 7 at 8.55 a.m. and sailed on Nov 8, bound to Dearborn.

The "Lee A. Tregurtha" reported that a 17-foot pleasure craft had capsized with four people onboard to the US Coast Guard in the evening of July 25, 2018. The vessel was near Detour Passage, Michigan. Watchstanders from Coast Guard Sector Sault Sainte Marie command center received a call via VHF-FM radio channel 16 from the cargo vessel. Sector Sault Sainte Marie watchstanders issued an urgent marine information broadcast, diverted the U.S. Coast Guard Cutter Buckthorn, launched a Coast Guard Station Sault Sainte Marie response boat crew, and requested an MH-60 Jayhawk helicopter from Coast Guard Air Station Traverse City. Approximately five minutes later, a good Samaritan who heard the urgent marine information broadcast arrived on scene. The good Samaritan vessel brought all four people onboard their vessel shortly before a response boat crew from Coast Guard Cutter Buckthorn arrived on scene. The four people were transported to the Detour Village boat launch. The capsized vessel sank in approximately 135 feet of water near Detour Passage. The Coast Guard was currently monitoring the area for any possible pollution or hazards to navigation. The Army Corps of Engineers will survey the channel.

The Interlake Steamship Company’s M/V Lee A. Tregurtha sailed today from Fincantieri Bay Shipbuilding Company in Sturgeon Bay, Wisc., becoming the shipper’s third self-unloading bulk carrier to be outfitted with exhaust gas scrubbers. Interlake became the first U.S.-flag fleet to test scrubbers on the Great Lakes in April 2015 after pioneering the emission-reduction technology on its M/V Hon. James L. Oberstar. Earlier this month, the M/V James R. Barker sailed as the fleet’s first 1,000-footer with scrubbers. “With the Lee A. Tregurtha back in service, one third of our fleet is now equipped with innovative scrubber systems implemented specifically to net significant emission reductions,” said Interlake President Mark W. Barker. “Reducing our environmental footprint and leading the way with this technology illustrates our commitment to continuous improvement across our fleet.” The retrofit of the Lee A. Tregurtha was supported by a $500,000 cooperative agreement from the U.S. Department of Transportation’s Maritime Administration (MARAD). http://www.marinelink.com/news/scrubbers-installed411623.aspx