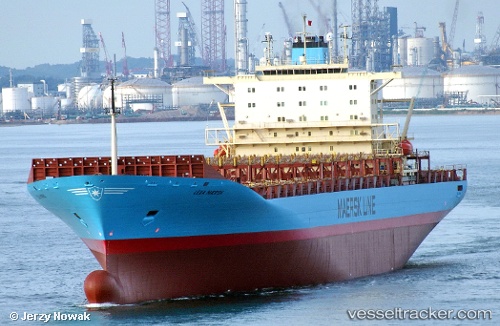 A crew member of the 'Lexa Maersk' who was stricken with COVID-19 in early May continued to make good progress recovering from the effects of the infection and was well enough to travel home recently to continue his recovery. The vessel was 380 nautical miles outside of Puerto Rico – enroute from Manzanillo to Tangier when the need for medical evacuation of a crew member became apparent after the ship’s captain had been in contact with Radio Medical, which provides remote support to ships using doctors ashore. After having difficulties finding a port to enter who would accommodate a COVID-19 patient, the 'Lexa Maersk' was allowed into the US Virgin Islands by Governor Albert Bryan which resulted in a 390 nautical mile journey outside the normal course. On May 7, she arrived at St. Thomas harbor and the crew member was shuttled ashore and taken by ambulance to Schneider Regional Medical Center. The patient was placed on a ventilator and remained at the hospital under treatment for 12 weeks and one day. Throughout the entire period of hospitalization, the Maersk company doctor was in contact with the responsible physicians as well as the next of kin to the crew member relaying the progress of his condition. After the crew member recovered sufficiently to return home, Maersk officials made arrangements for specialized transportation to accommodate his condition. Upon arrival into Manila, the crew member expressed his appreciation for the continuous support and involvement by the company.

Results of coronavirus tests expected on May 19

Those crew members of the 'Lexa Maersk' suspected of being infected with the coronavirus will remain on board the ship until the results of Erasmus MC were known. The others were checked at the APMTR terminal on the Maasvlakte. In the foremidday of May 18 the unloading of the cargo started. The five crew members will receive the results of their corona test on May 19. The company answered questions from the unions about the conditions of unloading. There was some concern among APM staff. Those who did not want to cooperate with the unloading of the ship, caould report this. APM stated to be taking the maximum measures to exclude health risks.

Five crew members of the 'Lexa Maersk', among them the Captain, who haven been infected with the coronavirus were transferred to the Erasmus MC in the morning of May 18. The remaining crew on board the cargo ship was checked at the APMTR terminal at the Maasvlakte in Rotterdam by a mobile medical team from the hospital. In addition to the control of the personnel, a deep cleaning of the ship followed. All rooms will be cleaned which can take days. The ship arrived in the Europahaven at 07:45 a.m. Unloading the ship started oat 11:30 a.m. as the he cargo could otherwise be spoiled. There was, hoevber, some concern among APM staff. APM stated to be taking the maximum measures to exclude health risks.