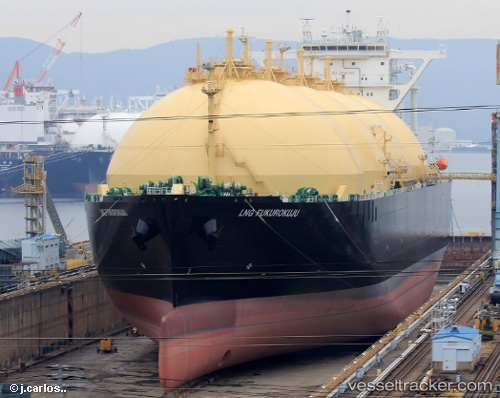 Mitsui O.S.K. Lines, Ltd. on July 28 took part in a naming ceremony for the newbuilding liquefied natural gas carrier LNG FUKUROKUJU, which is co-owned by MOL and Kansai Electric Power Co., Inc. at Sakaide Works of Kawasaki Heavy Industries, Ltd. Among the many guests on hand were KEPCO President and Director Yagi, who named the new vessel, and his wife, who cut the rope. The LNG FUKUROKUJU will serve a broad range of projects including the Australia/Pacific LNG Project after the delivery. The vessel adopts a new steam turbine engine that reuses steam for heating, which will also reduce fuel consumption, and an advanced heat insulation system that offers the lowest LNG vaporization rate - 0.08% - of any LNG carrier in the world. Its environment-friendly, economically-advanced design also effectively controls surplus boil-off gas. http://www.marinelink.com/news/fukurokuju-electric395336.aspx