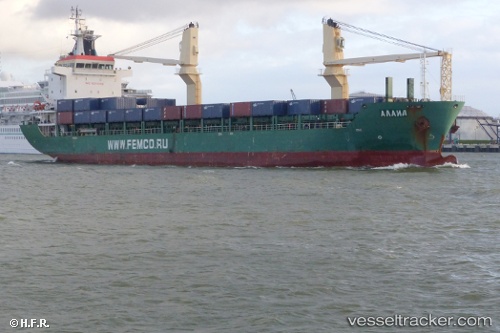 A Russian sailor who fell from a height of six meters aboard the "Alaed" when working on deck 80 miles off the Colombian coast suffered fractures to his forearm, hip and left ankle. A mayday call was issued to the National Navy which deployed a helicopter and a boat to medevac the victim. The ship was from Santiago de Cuba to Barranquilla. After the man was hoisted, he was transferred to the Health Establishment of the Naval School of Sub-officers ARC Barranquilla and finally, to a clinic in the north of the city. Spanish report with photo: https://www.bluradio.com/barranquilla/rescatan-en-alta-mar-marino-ruso-que-cayo-desde-un-buque-carguero-183270-ie2020922

On Oct 27, 2016, at 5.40 p.m. the "Alaed", enroute from Suez to Liepaja, suffered an engine blackout when entering the Kiel Canal locks in Holtenau. The bow was already fastened with one rope, the second had to let got, while the stern was situated off the middle wall. The propeller was still running and got entangled with some chains of the fenderings within the lock, destroying these. The bow rope was thrown back aboard. Due to the immense tension on the forespring which threatened to break, the stern could not be moved towards the quay. The engine could be restarted after two attempts. 15 minutes later the ship was safely berthed. The lock was barred for ship traffic for investigations. At 7.15 p.m. the "Alaed" was allowed to continue the voyage, ETA Liepaja Oct 29, 6 a.m. German report with photos: http://www.forum-schiff.de/phpBB3/viewtopic.php?f=2&t=23#p130866