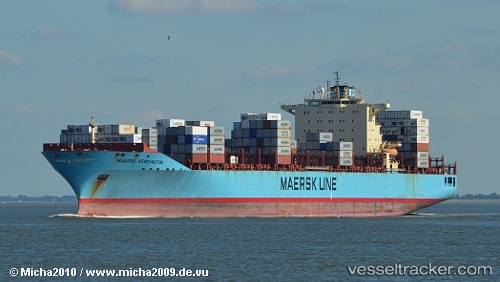 The US Coast Guard responded with units from the New York Fire Department and New York Police Department Harbor Police to an incident where a Sandy Hook Harbor pilot fell while boarding the 'Maersk Kensington' on Dec 30, 2019, at 4:30 a.m. The pilot, who was transported to a hospital on Staten Island by a Sandy Hook pilot vessel, eventually succumbed to injuries received in the fall. The Coast Guard has begun an ongoing investigation into the circumstance surrounding the fall.

Fire in container below deck

A fire broke out in a below-deck container on board the "Maersk Kensington" in the eastern Gulf of Aden on March 16, 2018, at 8.50 p.m. The ship was en route from Salalah towards Suez. All 26 crew members are safe and accounted for and the fire is reported to be contained. Safety measures were taken immediately. The crew reacted swiftly and as per procedure, by release of CO2 into the cargo hold to contain the fire. The ship dropped anchor off Salalah. It berthed at the Salalah Container Terminal on March 19. The ship sailed again on March 29, headed to Mumbai, ETA March 31.

Three shipping containers loaded with automobiles and kitchen supplies wound up in the waters of Newark Bay on Sunday, when they were knocked off the deck of a ship by a crane operator, officials said. The incident occurred around 11:30 a.m., at the Port Elizabeth container terminal operated by APM Terminals, a unit of A.P. Moller-Maersk, the Danish shipping conglomerate, said a spokesman for the Port Authority of New York and New Jersey, Maersk's landlord. Maersk containers, with their logo featuring a seven-pointed star in a light blue box, are a common sight piled near the port or being hauled by tractor trailers on the New Jersey Turnpike. The vessel was identified as the Maersk Kensington, a 982-foot container ship that records indicate had arrived from Norfolk, Va. http://www.nj.com/union/index.ssf/2017/02/shipping_containers_knocked_into_newark_by_crane_o.html