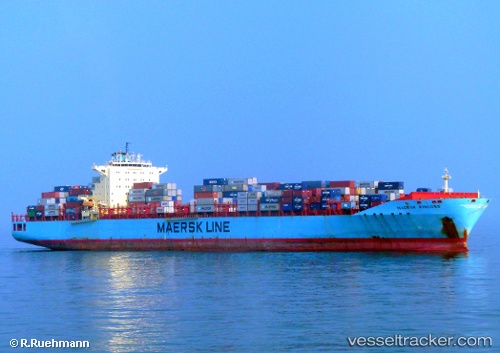 The 'Maersk Kinloss' rescued three Iranian mariners on Dec 18, 2019. The Maersk Line informed U.S. Naval Forces Central Command of the rescue of the mariners, who had been stranded at sea for several weeks, pasing the matter through NATO's Naval Cooperation and Guidance for Shipping (NCAGS) team, which was created for such contingencies. The stranded mariners were transferred to the Omani Coast guard, which was coordinating their return to Iran.

Boxship Maersk Kinloss arrived to Iliychevsk, Ukraine, Black sea, on July 15 2012 from Konstanza, Romania, with 2082 containers on board, including 1439 transit containers and 643 to be offloaded in Ilyichevsk. On July 17 during offloading operations dockers opened one of the holds and found container with obvious signs of an explosion and fire, container had a dangerous cargo of aluminum phosphide. The top of the container was blown off, sides were bloated, cargo was destroyed. Neighbouring containers were also damaged. An investigation found, that there were three containers on board of the vessel, containing dangerous cargoes of fluoric acid, aluminium phosphide and oxidizer, two of them were stacked in the hold among other containers, which is actually, a violation of safety regulations specifying the transportation of such cargoes. Ilyichevsk emergency services sent an emergency team to handle the remains of the poisonous cargo and check the atmosphere on a vessel, in port and in neighbouring areas for traces of phosphate. The remains of the cargo are to be disposed of in a special dangerous wastes storage. Vessel is still in Ilyichevsk, investigation is under way. Photos from local media show the damaged container, destroyed cargo and chemistry specialist checking the vessel. See photos at http://www.odin.tc/news/read.asp?articleID=1113