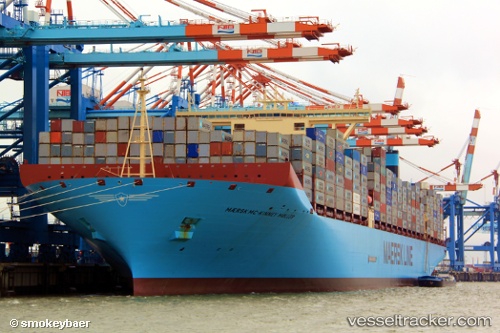 Maersk Line has confirmed to UK customers that it will switch its flagship Triple-E, the Maersk Mc-Kinney Moller, to DP World London Gateway at the weekend (Jan. 31, 2016) from its scheduled call at Felixstowe The UK east coast port is continuing to struggle with quay and landside congestion caused by adverse weather and a bunching of ultra-large container vessels, with London Gateway being the biggest beneficiary of a series of ULCV diversions. The 18,340 teu vessel operates on the carrier’s Asia-North Europe AE10 loop as part of the 2M alliance with MSC. It was originally planned to discharge and load at berths eight and nine at Felixstowe, arriving on Sunday at 5pm.

Maersk McKinney Moller – Maersk Line’s iconic Triple E created a record of sailing with the record load of 18,168 TEU from the port of Algeciras, Spain. The ship is now en route to Tanjung Pelepas in Malaysia. With this, Maersk McKinney Moller becomes the first vessel to have sailed with over 18,000 TEUs and breaks the previous record set by Mary Maersk that also sailed from Algeciras with 17,603 TEU. Source: Maersk Line

Finally… the highly anticipated LEGO version of the world’s largest ship, Maersk Line’s Triple-E, is on sale and ready to order on backorder. With more than 1,500 pieces, features of the Triple-E set include rotating gold-colored propeller blades, brick-built twin 8-cylinder engines, viewing window into the engine compartment, adjustable rudders, detachable lifeboats, removable containers, rotating crane arms and a special ‘good luck’ coin placed. For you enthusiasts out there, the model boasts a rare color scheme with medium azur, dark red, sand blue and sand green. The set also includes a display stand and fact plaque with detailed information about the ship. The Triple-E set was first unveiled by LEGO in September, just a few months after the first real life vessel in the Triple-E class, MV Mc-Kinney Møller, sailed from the DSME shipyard in South Korea. Source : gCaptain