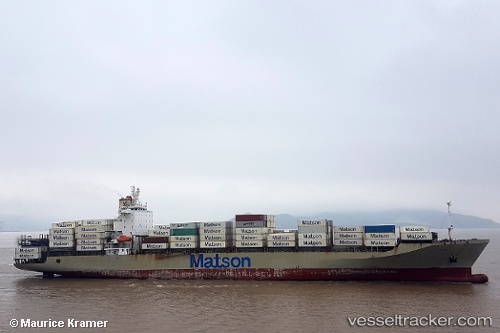 The crew of three of the s/v "Walkabout" were safely taken aboard the "Manukai" which diverted towards the boat enroute from Los Angeles to Honolulu. The castaways had been spending 24 hours battling the effects of Hurricane Julio aboard the disabled sailboat 414 miles northeast of Oahu on Aug 11. Rescued were the 61-year-old Ben Nealy, the22-year-old Lee Nealy, and the 22-year-old Mike Vanway. Their 42-foot sailboat enroute from Stockton, Calif., to Honolulu, was dismasted and flooding. A C 130 Hercules of the Coast Guard had remained on scene until the container ship arrived at the sailboat’s location on Aug 10 at approximately 10 p.m. The "Manukai" first attempted to send a life raft to the sailboat, but conditions were too rough and they were unsuccessful. The ship’s crew determined it unsafe to proceed and suspended rescue efforts until first light of the next morning. The "Manukai" crew safely took aboard the three men at 7:52 a.m. They successfully shot a line to the sailboat and pulled it alongside. The three men climbed a 30-foot ladder draped over the side of the "Manukai"’s hull. On-scene were winds of 20 mph with 13-foot seas. The sinking "Walkabout" remained adrift with torn sails. The Coast Guard has issued a warning notifying mariners of the hazard to navigation. The "Manukai" which rerouted 276 miles to assist with the rescue was expected to arrive in Honolulu on Aug 12 at 5 a.m. Video: http://www.dvidshub.net/video/354790/sailboat-caught-hurricane-julio#.U-nD2GNBlsl

Container ship diverted to save crew of sinking sailing vessel

The "Manukai" diverted and was enroute to the location of the 42-sailboat "Walkabout" caught in Hurricane Julio 414 miles northeast of Oahu on Aug 10, 2014. The sailing vessel was disabled and taking on water with three people aboard. On-scene conditions were reported as 92 to 115 mph winds with 30-foot seas. One of the hatches has blown away and onboard bilge pumps were unable to keep up with the flooding. The vessel's life raft has also been blown overboard. At 7:15 a.m., watchstanders at the Joint Rescue Coordination Center in Honolulu received notification from the International Emergency Response Coordination Center in Texas that an alert message was received from the "Walkabout" requesting Coast Guard assistance. JRCC diverted an airplane from the National Hurricane Center, Teal 76, from inside Hurricane Julio to locate the vessel and establish VHF radio communications. At 10:49 a.m., Teal 76 reported Mayday calls being broadcast from the "Walkabout". An HC-130 Hercules airplane crew launched from Air Station Barbers Point at 11:10 a.m. to deliver a life raft and relieve Teal 76. Report with photo: http://www.uscgnews.com/go/doc/4007/2221742/

After the "Manukai" has located the missing s/y "C:Drive" on Nov 7, 2013, the Coast Guard has boarded the Honolulu sailboat some 1,600 miles west of Oahu. There was no one aboard. Skipper Greg Stephanoff has been reported missing since Oct. 2, when he left the Ala Wai Boat Harbor bound for Hanalei Bay on Kauai. A friend notified authorities he was missing two days later. The crew members aboard the container ship notified the Coast Guard that they had come across what appeared to be a derelict sailing vessel west of Oahu. The container ship attempted to communicate with the vessel on VHF channel 16 and made several blasts on the ship’s whistle in an attempt to contact anyone aboard. No one was observed aboardm and the "Manukai" continued its course having no means of boarding. The Coast Guard Cutter "Kukui", a 225-foot buoy tender home ported in Honolulu, was dispatched to locate and board the vessel. The trip took four days but the crew finally located the C:Drive and boarded the sailing vessel on Nov 15 afternoon. They did find a GPS and personal effects which were being examined. The 42-foot Catalina sloop, was marked with paint and remained adrift.