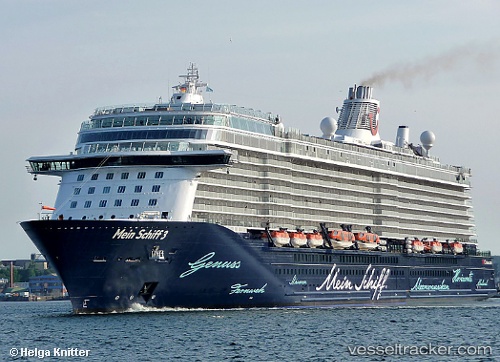 On June 26, 2018, at 8.15 p.m. the "Mein Schiff 3" broke off her moorings at quay 3 in Honningsvåg in stormy western winds with gusts of 25,2 meters per second around 8 p.m. The ship had arrived from Geiranger at 4.50 p.m., when all in a sudden the storm broke lose with full force. The MRCC in Northern Norway raised full alarm and notified all ships in the area. The "Mein Schiff 3" was pushed against the quay with its port side stern which suffered slight damage. Also the quay was affected. After half an hour, the ship was under control and that the acute danger was over. The captain asked vessels in the vicinity to remain on standby. The SAR vessel "Odin" arrived at Honningsvåg at 9 p.m. and stayed in the area until the situation had calmed down. The anchors of the cruise ship had wound into each other so it was difficult to get clear. By 10 p.m. the "Mein Schiff 3" left the area between the breakwater of the port and quay 3 and anchored south of Honningsvåg with the engines running. The vessels in preparedness of the ship returned to the wharf in Honningsvåg with the "Odin" and the Coastguard vessel "Andenes" remaining in standby. The Coast Guard took over responsibility for the operation from the rescue center. Many of the passengers were on a trip to the Nordkapp when the ship went adrift. During the night everyone was taken on board by tender boats. At 3.25 a.m. on June 27 the cruise ship left the port area, bound for Longyearbyen. Norwegian reports with photos and video: http://www.radionordkapp.no/nyheter/6663/kulingen-tok-mein-schiff-3/ https://www.tv2.no/a/9940407/ https://www.dagbladet.no/nyheter/kraftig-uvaer-i-nord-norge--cruiseskip-har-slitt-seg/69953604 https://www.youtube.com/watch?time_continue=10&v=Rg5qScWCE5o http://crew-center.com/cruise-ship-hits-pier-norway-after-moorings-fail-high-wind

The "Mein Schiff 3" finally sailed from Southampton on May 3 at 3 p.m. with a delay of 19 hours and headed to Bremerhaven, ETA May 4, 4 p.m. now. Before the technical issues could be resolved by a diver team which managed to seal a leaking water tank in the foreship during several hours work. The safety of ship and passengers was affected at no time.

Cruise ship delayed after diver survey and death on board

The scheduled departure of the "Mein Schiff 3" from Southampton in the evening of May 2, 2018, was delayed for an uncertain time due to some kind of technical trouble one hour before sailing at 8 p.m. The captain announced diver's activity which started at 10 p.m. at the bow of the ship. In an unrelated incident, during the afternoon of the same day a passenger of the cruise was found dead in his capbin on deck 9. Police boarded the ship for investigations, also two ambulances attended. On board the ship were about 2.500 passengers. The ship was scheduled to arrive in Bremerhaven on May 4 at 5.30 a.m. at the end of a cruise which started on Apr 23 in Palma de Mallorca. In the morning of May 3 the ship was still berthed at the Southampton Cruise Terminal. German report with photo: https://www.svz.de/deutschland-welt/deutsches-kreuzfahrtschiff-sitzt-in-englischem-hafen-fest-id19743776.html