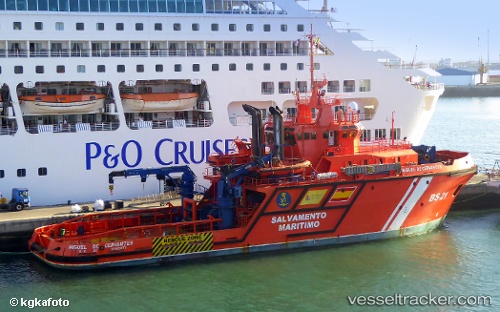 The bodies of four migrants, who died on the Atlantic Ocean in an inflatable dinghy with 34 people on board, and a survivor were brought to Spain's Canary Islands on Oct 2. The 'Miguel de Cervantes' has recovered the bodies of the four dead people found 150 miles southwest of Gran Canaria. The sole survivor was an exhausted 27-year-old man who was found by a cargo vessel on the dinghy alongside the bodies. The survivor, suffering from hypothermia, was flown to the island of Gran Canaria by helicopter in the afternoon of Oct 1. The rest of the victims, 29 in total, have been swallowed by the ocean. They had left from south of Laayoune in Western Sahara.

Four bodies and one survivor recovered

The 'Miguel de Cervantes' has recovered the bodies of four deceased people found on Oct 1, 2022, about 150 miles southwest of Gran Canaria in a rubber boat.One survivor was also rescued. The ship headed to Las Palmas, where it was due to arrive on Oct 3 at 6 a.m. A merchant ship had initially located the boat and managed to rescue the survivor who was later hoisted by the SAR helicopter Helimer 206.

On Jan 2, 2015, the "Miguel de Cervantes" refloated the Chinese f/v “Lian Run 34”, 160 gt, which had drifted aground off San Cristóbal in choppy seas after the anchor broke. The crew of seven was taken off by the helicopter Helimer 2011 between 3.40 and 4.30 a.m. Early on Jan 2 Salvamente Maritimo started to pull the ship off the beach jointly with the "Salvamar Nuki", which succeeded after three failed attempts around 10 p.m. with the rising tide. Around midnight the casualty was anchored off Puerto de Luz. Spanish reports with photos: http://www.laprovincia.es/sucesos/2015/01/02/rescatan-san-cristobal-siete-marineros/662129.html https://twitter.com/salvamentogob/status/550983027611156480/photo/1