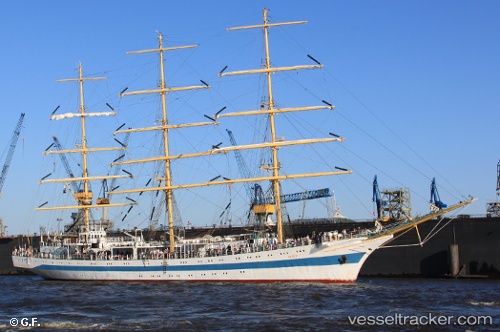 The "Mir" has berthed at the Bonte Quay in Wilhelmshaven on Oct 7, 2019, after the training voyage has been aborted on the North Atlantic due to adverse weather. The ship will stay in port about eight to ten days and offer an open ship daily between 10 a.m. and 6 p.m. during this time. German report with photo: https://www.wzonline.de/nachrichten/aktuelles/artikel/besatzung-der-mir-laedt-zum-open-ship-ein.html

During a harbour party in Beremerhaven the "Mir" slid along the quay and damaged a van with guests of the tourism support society BIS on June 25, 2019, at 6.30 p.m. The ship was about to depart and had requested the assistance of the tug "Svitzer Vale" (IMO: 9831921) for a trip onto the Weser. The van was parked on the Sea Bath Quay. The stern of the STS struck it, so that it was pushed onto its side and damaged. The vessel also hit tents of the THW (Techical Support Work) which were erected on the quay. the damage was about 50.000 Euro. The "Mir" only suffered scratches and a dent at the starboard side stern. She left the port on May 27 at 8.30 a.m., bound to Rouen. German reports with photos and video: https://www.weser-kurier.de/bremen/bremen-stadt_artikel,-segelschulschiff-rammt-transporter-beim-seestadtfest-_arid,1832933.html https://nord24.de/bremerhaven/nach-karambolage-beim-seestadtfest-mir-laeuft-montag-aus https://nord24.de/bremerhaven/seestadtfest-bremerhaven-mir-rammt-wagen-beim-ablegen

Mir damaged by pleasure boat on the Warnow

In the evening of Aug 10, 2018, a 12-m-pleasure boat allided with the "Mir" at its berth on the Warnow at the Rostock Yard. The sailing vessel was damaged at starboard side nad suffered a breach of 19 centimeters 1,5 meters above the water line. The pleasure boat suffered bow damage. The "Mir" was detained by the relevant authorities. The captain intended to try a repair during the night to be able to participate at the Rostock Sail again on Aug 11. As this failed, the ship will have to remain at the quay, not participate in the Windjammer Parade and be repaired in St. Petersburg upon its return next week after being temporarily fixed in Rostock. German report with photo: https://www.presseportal.de/blaulicht/pm/108749/4031804