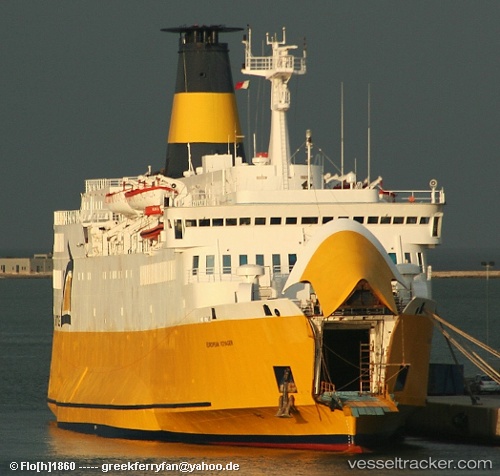 The "Moby Niki", sailing on the route Piombino-Porto Ferraio upon Elba, suffered an electricity panel failure in the engine room on May 24, 2018, at 3 p.m., shortly after leaving Piombino with 300 passengers on board. The ferry returned to port at 3.45 p.m. under own power, only assisted by a tug during the docking manoever, and had to disembark all passengers who were carried on aboard other ferries. Two crew members were treated for slight injures in the hospital of Piombino. Surveys on board were carried out by the personnel of the Piombino Coastguard, with the help of the Rina (Registro Italiano Navale) technicians. The ship resumed sailings on May 25. Italian report with photo: http://iltirreno.gelocal.it/piombino/cronaca/2018/05/24/news/avaria-alla-moby-niki-sbarcati-300-passeggeri-due-marittimi-feriti-1.16876340

The "Moby niki" which struck an obstruction near Palmaiola Island 11 Dec 2017, suffering hull cracks, which had been under repair in Naples since Dec 24, had repairs completed on March 29 at the Nuova Meccanica Navale Srl in Naples and was expected to sail for Portoferraio on March 30.

During the underwater checks, divers found about a dozen cracks in the hull of the "Moby Niki" at the port of Portoferraio.The ferry has been inspected by Rina technicians. Repair work by specialized technicians started in the afternoon of Dec 13 under constant monitoring by the Port Authority. The port captain has banned the entire port between the berth 3 south, where the ferry was being moored, and berth 1 north, to protect the workers. The Elba Coast Guard has again carried out checks in the waters of the Piombino canal, in order to avoid any potential danger of marine pollution due to the accident. The cause of the accident near the island of Palmaiola was still being investigated. At noon the ferry had passed the Secca del Frate lighthouse in a very close distance, following a route that seemed more like the one for Rio Marina than the one for Portoferraio, and then turned almost 90 degrees towards Cavo, passing a zone which was a little less than five meters deep. The ferry berthed at the under repair at the Cantieri del Mediterraneo in Naples on Dec 24 at 10 a.m. Spanish report with graphics: http://www.quinewselba.it/portoferraio-moby-niki-urtato-scogli-secca-palmaiola-elba.htm