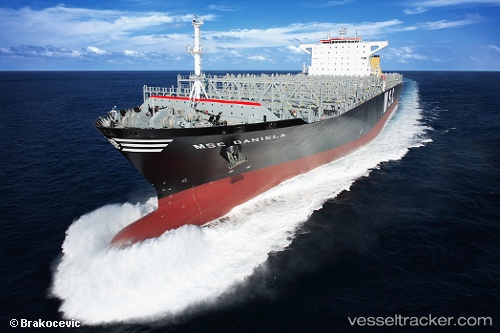 On Aug 8 the "MSC Daniela" left the China Shipping Industry Changxing Shipyard in the port of Shanghai four months after having been damaged in a fire off Colombo in April, and headed to Dalian, ETA Aug 11, where it was to be re-inserted in its service mid of August. It was headed from Xingang, Busan, Ulsan, Ningbo, Shanghai, Shekou and Yantian to Singapore and further to Beirut via Suez Canal before setting course to Gioia Tauro, La Spezia, Genova, Fos, Valencia, Barcelona and Marsaxlokk before returning to Asia in October.

Boxship in Shanghai for repairs

The "MSC Daniela" was expected to be back in service in Mid-June after repairs of the fire which broke out on Apr 4 in the one of the containers in the aft section wich quickly spread. Some of the boxes had continued to smoulder for more than two weeks. The ship entered the Changxing Yard in Shanghai on May 22 following an eight day voyage from Sri Lanka, and was drydocked soon after.

Swiss container operator MSC has aired fears misdeclared hazardous cargo may have caused the fire aboard the "MSC Daniela" off Sri Lanka’s coast on April 3. The Sri Lankan Navy released a report on the incident saying two fast attack crafts were sent to help the vessel but initial efforts went in vain due to the intensity of flames. Two Sri Lankan Port Authority tugs also joined the operation before the crew was finally evacuated. MSC continued to investigate the accident. A final set of containers were unloaded at the Jaya Container Terminal at Colombo on April 27 with some containers still smouldering on deck. Inspectors were examining the burned units and cargo to determine the fire’s source. Sri Lankan authorities were concerned some chemicals in the air were drifting on land, thereby imperilling local people.