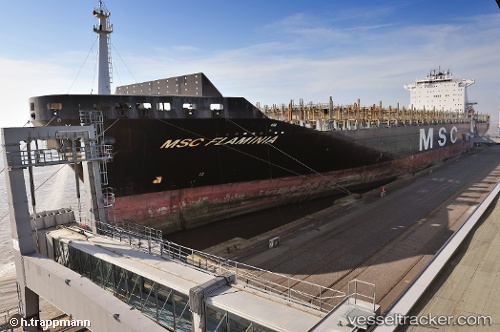 MSC, the Swiss ocean carrier, is not liable for the explosion and losses related to the MSC Flaminia fire from July 2012 that claimed the lives of three crew members and destroyed thousands of cargo containers, New York District Court said in a verdict on September 10.

The U.S. District Court for the Southern District of New York has reached a decision in the case of the explosion aboard the "MSC Flaminia" in 2012. According to the court, the fault for the casualty lies with the manufacturer and freight forwarder of a potentially hazardous cargo. On July 14, 2012, as the vessek was under way from New Orleans to Antwerp, a cloud of smoke began emerging from Hold 4. The crew treated it as evidence of a container fire and released CO2 to suppress it. When a seven-man team went forward to prepare firehoses alongside the hatch, an explosion followed. In the aftermath, three crewmembers were killed, two were severely injured, the vessel was damaged, and most of the cargo containers aft of Hold 4 were destroyed. Damage to the ship amidships, with container bay numbers superimposed (German Federal Authority for Marine Casualty Investigation) In an earlier opinion, the court found that the blast was the result of a runaway chemical reaction within three tanks of divinylbenzene (DVB) - a monomer additive that is used in making plastic resins - and a spark created by the crew's reasonable firefighting response. According to the court, the manufacturer of this cargo was aware of the substance's tendency to self-polymerize and generate large amounts of heat if exposed to temperatures over 85 degrees F for a prolonged period. The tanks of 80 percent DVB (brand name DVB80) were delivered to the New Orleans Terminal for shipment in June, where they were stored in the sun for 10 days before loading aboard the Flaminia. They were stowed in the vessel's hold next to a heated cargo of diphenylamine, and near to the ship's heated bunker fuel tanks, exposing them to a higher-than-normal temperature during the voyage. Based on expert testimony that the pre-loading and post-loading storage conditions were causal factors in the chemical reaction and the explosion that followed, the court found that only cargo manufacturer Deltech and NVOCC Stolt Tank Containers B.V. bore responsibility for the casualty. It specifically found that shipowner Conti, vessel operator NSB, and ocean carrier MSC were not at fault and bore no liability. The court assigned Deltech the greatest responsibility for the accident. Contrary to their own safety protocols developed after prior polymerization incidents that determined that shipping DVB out of New Orleans should be avoided in warmer months, Deltech booked the shipment of DVB80 out of New Orleans for late June. This fateful decision was the result of — at the very least — a combination of a considered decision at the highest levels of Deltech and managerial errors that followed. Deltech was assigned a 55 percent share of the liability.

The European Commission presented the new EU operational guidelines for ships in need of assistance. The guidelines have been developed by an expert group composed of Member States’ competent authorities, with the input and support of industry stakeholders, following an initiative of the Commission in the aftermath of the "MSC Flaminia" fire. Commissioner Bulc congratulated the stakeholders for taking part in this joint positive effort, in the interest of maritime safety and environmental protection. The EU operational guidelines were drafted to ensure better coordination and exchange of information amongst competent authorities and industry stakeholders involved in the response to an incident concerning a ship in need of assistance, such as the "MSC Flaminia" in July 2012. While the container vessel was in international waters in the Atlantic Ocean, there was an explosion and a fire on board. The ship was severely damaged. Given the volatile situation the process of deciding where to accommodate the vessel resulted in the ship being finally accommodated in a place of refuge in Germany in September 2012.