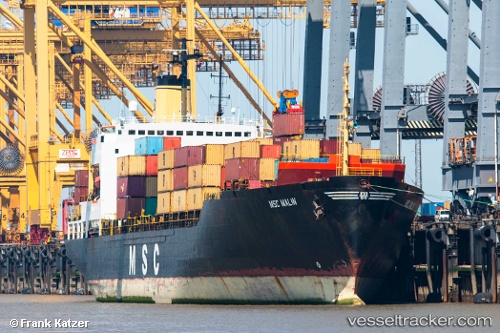 A stevedore died after becoming trapped between two containers in the port of Helsinki. The incident happened on 22 October at Vuosaari Harbour: the main cargo handler, dealing with box and ro-ro operations, at the Port of Helsinki, which consists of three harbours. The unnamed stevedore was working for Finnsteve, a subsidiary of Grimaldi-owned Finnlines, when the accident took place on the deck of the 21,586 gt box ship MSC Malin, according to port officials. Emergency services were called to the scene, but he died on the spot despite the efforts of colleagues and medics. Under Finnish law the victim's name cannot be released until police have completed their investigation into his cause of death. http://www.ihsmaritime360.com/article/19654/stevedore-killed-in-helsinki-port

The Vessel Traffic Service of the Great Belt has averted that the "MSC Malin" ran aground off the Kalundborg Fjord on Apr 6, 2014. The ship had sailed from Bremerhaven on Apr 5 short past midnight and was bound for St. Petersburg with an ETA of Mar 8, 8 p.m. The "MSC Malin" was close to running aground when overtaking another ship. The container ship was southbound when the dense fog overtook the two ships in Kalundborg Fjord. After a call from the duty officer at the Vessel Traffic Service Great Belt the "MSC Malin" changed the course, after the vessel with its draft of 9.4 meters sailed towards shallow waters where the depth was only 5.9 meters.

On July 16, 2013, around 7 a.m. the "MSC Malin" ran onto the embankment of the Wester Scheldt at the Margarethapolder, east of Terneuzem and caused considerable damage. The ship was enroute from Helsinki to Antwerp when it suffered rudder failure and got stuck on the bank. Assistance by tugs of Multraship was rejected by the master who managed to pull the ship off with own power. The ship docked at the Northsea Terminal at 9.50 a.m. and proceeded to the Delwaide Dock at 5 p.m. Surveys by Scheldestromen and Rijkswaterstaat showed that more than fifty meters rubble had disappeared and that the zinc pieces, which should keep the stones in place, were damaged. Repairs will be carried out only in fall. The container ship left Antwerp again on July 17 around noon, bound for Teesport where it arrived on July 18 at 5.45 p.m.