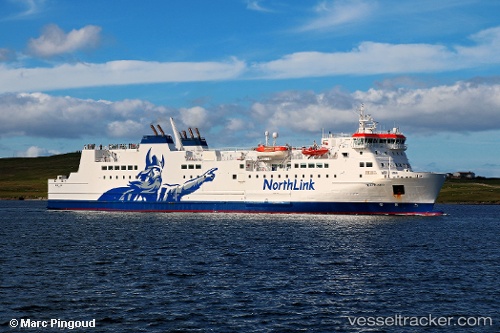 Three lifeboats and a helicopter were scrambled to the North Sea after a man was reported missing from athe "Hjaltland" on June 27, 2018. The lifeboats at Peterhead and Aberdeen have been sent out again to resume the search this morning, joined by the Coastguard helicopter from Inverness. Mayday relay broadcasts were issued and a number of vessel in the area also joined the search. The UK Coastguard was informed of the incident just before 11 p.m. where a crew member on board the Aberdeen to Lerwick ferry could not be found. Lifeboat teams from Peterhead and Fraserburgh were sent to search the North Sea at 10.52 p.m., as well as Coastguard helicopter 951 from Inverness. The Aberdeen Lifeboat has joined the search. The search was suspended at 5.15 a.m. after nothing was found in the search area. The "Hjaltland" had left Aberdeen at 7 p.m. bound for Lerwick. The relevant authorities have been informed and ferry operator Serco was liaising with HM Coastguard and Police Scotland.

NORTHERN isles ferry operator Serco NorthLink has admitted a ship’s master lost control of a vessel for a few seconds, during which the ferry rolled so much that some of its 500 passengers thought the vessel was going to capsize. The ferry Hjaltland was on its way from Lerwick to Kirkwall on Wednesday night when the incident happened shortly after 9.30pm. Frightened passengers reported glass smashing in the bar and plates in the restaurant as the Hjaltland listed to port side, yet no one explained what happened during or after the boat journey. When approached by the media on Thursday, Serco NorthLink’s marine manager Captain Stuart McCallum said that there had been a “technical issue with the auto pilot” behind the event that lasted 14 seconds. \As a result the vessel was immediately switched to hand steering in what was described as “a professional response”. McCallum said that the ferry had been rolling at an average of nine degrees in moderate seas with the wind blowing at force 6 from the south. “A heavier than average roll was experienced at 21:38:42 recorded at 16 degrees, the cause of this additional roll was identified as a technical issue with the auto pilot control,” he said. “During the roll and subsequent course recovery hand steering was engaged and control established immediately, normal passage resuming at 21:38:56. http://www.shetnews.co.uk/news/11180-passengers-feared-northlink-ferry-capsize

Search for missing passengers not to be resumed

The search for a young man missing from the "hjaltland" since Sep 9 was not to be resumed. A major air and sea search was launched for the 22-year-old man during the "Hjaltland"'s sailing from Lerwick to Aberdeen. The "Hjaltland" had retraced its east coast route, and was joined the the search by lifeboats, commercial vessels and a helicopter. The rescue helicopter and lifeboats were stood down at 8:30 p.m. Also the Peterhead lifeboat joined flanking RNLI stations to search for the young man in the North Sea. The RNLI Peterhead Relief Tamar Lifeboat "Frank & Anne Wilkinson" was launched at 6.30 a.m. with its volunteer crew. Aberdeen, and Fraserburgh lifeboats were also launched and two rescue helicopters were also involved in the search. Nine vessels assisted the Peterhead lifeboat, and others assisted Aberdeen and Fraserburgh. After a 15 hour unsuccessful search, everyone was stood down, and the lifeboat returned to its berth at Peterhead Harbour, at 9.40 p.m. The sea conditions were 1 - 2 meters swell, and the wind was west by North force 2 – 3. Visibility was excellent. Reports with photos: http://www.bbc.co.uk/news/uk-scotland-north-east-orkney-shetland-24030448 http://rnli.org/NewsCentre/Pages/Lifeboats-in-15-hour-shout-for-missing-ferry-passenger.aspx