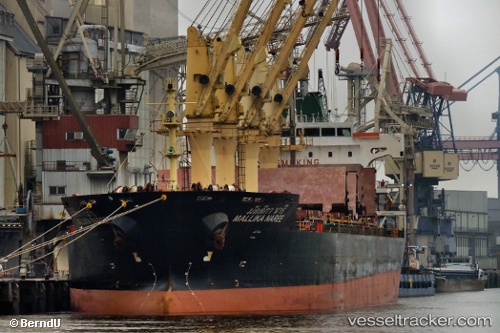 The 'Mallika Naree' suffered an engine failure on Oct 15, 2019, at 11.30 p.m. in the Bug-Dnepr Canal, while proceeding towards the open sea, en route from Nikolayev to Alexandria with 28.600 tons of soy as cargo, The ship was anchored within the narrow fairway and blocked the canal traffic, turning 180 degrees during maneuvering and subsequent repairs. Four hours later the engine was restarted, but the ship couldn’t be turned around, and completed the canal transit moving astern with assisting tugs. After the bulk carrier safely reached the Black Sea it continued its voyage with an ETA as of Oct 19.

The US Coast Guard was monitoring the "Mallika Naree"(IMO-Nr.: 9354739), after she ran aground with a cargo of cement and steel from Port de Bouc and a crew of 26 on board off Sewells Point in Norfolk, Virginia, on June 29, 2017. Watchstanders at the Coast Guard Sector Hampton Roads Command Center in Portsmouth received a call at 12:50 p.m. that the bulk carrier lost propulsion in the Elizabeth River, struck buoy #5 and ran soft aground outside the channel. A 45-foot and a 29-foot boat were deployed from the Coast Guard Station Portsmouth. A boat crew from the Coast Guard Aids to Navigation Team Hampton Roads launched at about 1:00 p.m. An MH-60 Jayhawk helicopter crew from Coast Guard Air Station Elizabeth City, North Carolina, was diverted at 1:20 p.m. to conduct an overflight assessment of the surrounding area. Also on scene were crews from the Virginia Marine Resources Commission and the Norfolk Fire Department. No signs of pollution were detected. No injuries were reported, and the vessel was not taking on water. Tugs refloated the vessel and pulled it to a nearby anchorage in the Elizabeth River, where it was safely anchored with the tug "Surrie Moran" (IMO: 9239707) remaining on standby. Reports with photos and video: https://pilotonline.com/business/ports-rail/cargo-ship-runs-aground-near-naval-station-norfolk/article_a6529f10-12bb-59e0-aee3-391579685e8f.html http://www.13newsnow.com/news/586-foot-thai-flagged-cargo-boat-runs-aground-in-norfolk/453107401 http://wavy.com/2017/06/29/disabled-cargo-ship-elizabeth-river/ http://wtkr.com/2017/06/29/cargo-vessel-runs-aground-in-norfolk-no-injuries-reported/

The owner of the "Good Pacific" apparently got tired of waiting for Russian icebreaker, and called a Finnish ice-classed tug of "Zeus" type which reached the "Good Pacific" at 9.30 p.m. Feb 12 to take the vessel to Tallinn port. Sources report the Indian owner paid $85,000 to Rosmorport, Russian State Agency, for ice-convoy and tug services, but didn’t get any. odin.tc