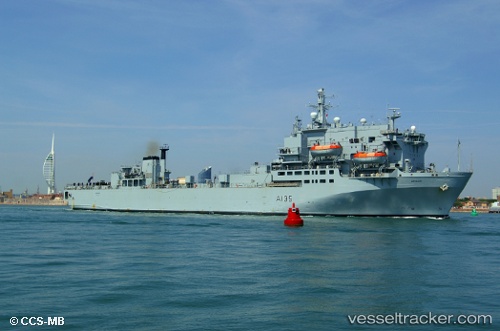 Royal Navy flight crews came to the aid of a British yachtsman stricken in rough seas in the Bay of Biscay on Nov 17, 2017. Wildcat helicopters from the 825 Naval Air Squadron scrambled to an SOS call from the yacht "Takita" after it lost its mast in a storm during a journey from the Azores, in the mid-Atlantic, to Britain. The crews circled three times in strong winds off the French coast before managing to spot the 30ft yacht, which had lost its radio transmitter but was still seaworthy. The sole yachtsman pulled alongside the RFA "Argus", , and the ship’s crew passed him jerrycans of fuel enough to allow him to reach Brest in France for repairs. Report with photos: http://www.theargus.co.uk/news/national/15669778.Navy_helicopters_come_to_solo_yachtsman___s_rescue_in_rough_seas_off_France/

On Sep 17, 2016, a fire broke out aboard the "Argus" in Falmouth Docks at 10.20 a.m. Three fire engines went to the scene and staff from A&P were evacuated and waited outside away from the vessel which was under repair in the dry dock. The fire alarms were turned off after the fire crews started to arrive. One of the engines at the scene has come from Truro Fire Station. When they arrived, the fire was already out, and thermal cameras were used to search for remaining hot spots. Report with photo: http://www.westbriton.co.uk/fire-at-falmouth-docks/story-29725029-detail/story.html#4KBSof5Kpz0wl2ii.99

The UK Ministry of Defence is ramping up its efforts in the fight against Ebola with the deployment of troops, equipment and a medical ship to West Africa as the World Health Organization warns that the outbreak could infect 10,000 new people per week. This week, the MOD is preparing to deploy the RFA Argus on a mission to West Africa where it will serve as an offshore base for troops and medics working to set up an Ebola treatment unit in Kerry Town in Sierra Leone. The ship, a Primary Casualty Receiving Ship (PCRS) equipped with state-of-the-art medical facilities, will be loaded with hospital beds, troops, army medics and 3 Merlin helicopters to facilitate the rapid movement of key personnel and equipment to areas where they are needed the most. While RFA Argus can carry out much of the same missions as a Hospital Ship, it is not designated as one as defined by the Geneva Convention and so it does not display the International Red Cross symbol. Argus is part of the Royal Fleet Auxiliary so it is therefore civilian-manned. The deployment of the ship, troops and helicopters is part of the UK’s Operation Gritrock, which aims to help up to nearly 8,800 patients over a 6-month period. The UK has also promised at least 700 new beds Ebola treatment facilities in West Africa. BBC notes that the ship itself will not be used to treat Ebola patients, rather it will be used mainly to transport supplies and key personnel ashore. http://gcaptain.com/royal-navy-medical-ship-medics-deploy-west-africa/