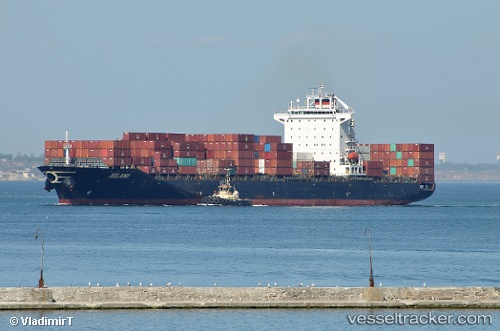 The "Navios Lapis" suffered an engine room fire, coming from Durban, before arriving at Cape Town under its own power on May 9, 2018. The vessel was undergoing inspections at the Jackson Wharf to find on the extent of damage to the generator on May 11. Details of repairs were unknown at the moment.

The multi-billion-dollar collapse of a South Korean freight shipping line has created a tense stand-off just outside Port Phillip Bay in Melbourne. Hanjin Shipping has ordered its box freighter, the Hanjin Milano, to drop anchor outside the heads in an attempt to prevent authorities seizing the vessel under the order of creditors. The company filed for receivership last month, leaving more than 100 ships and their cargo at sea. The Milano’s sister ship, the Hanjin California, was seized by creditors when it entered Sydney Harbour last week. The stranded crew are thought to have around two weeks of food supplies. Jim Wilson, the Australian editor of the shipping information provider Lloyd’s List, said it was likely the ship would be arrested by creditors if it came into port. Read further at http://www.hellenicshippingnews.com/stranded-hanjin-milano-stuck-in-tense-stand-off-outside-port-phillip-bay/

Hanjin ship drifting off Melbourne due to arrest fears

The "Hanjin Milano" remained drifting off Melbourne due to fears the vessel may be arrested by its owner. The shipping company stopped the ship from entering the port. There was a chance that Rickmers may arrest the ship due to outstanding charter payments. The "Hanjin Milano" departed Shanghai on Aug 23, 2016, and was scheduled to arrive in Melbourne on Sep 12. The ship has been chartered from Rickmers Reederei GmbH & Cie since September 2009.