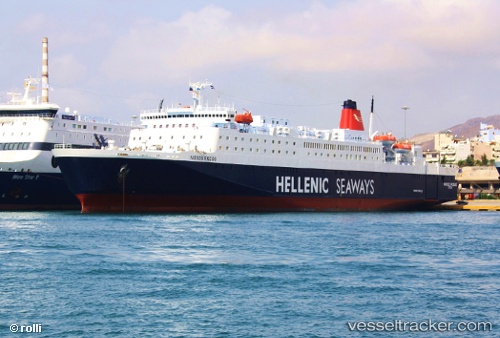 Elderly passenger died on board

The Port Department of the Central Port Authority of Piraeus was informed by the captain of the 'Nissos Rhodos' in the early morning of Nov 15, 2020, that an 84-year old passenger was found consciousness inside the ship enroute from the port of Heraklion to the port of Piraeus. Upon the arrival of the ship in the port of Piraeus, the victim was disembarked and taken to the General Hospital of Elefsina by ambulance, where his death was confirmed. An autopsy was ordered by the Central Port Authority of Piraeus, which was conducting the preliminary investigation.

The "Nissos Rodos" suffered a ramp failure in Piraeus on May 5, 2019, at noon. The ferry was preparing to depart from Piraeus for its scheduled service to Chios and Mytilene, when an electrical damage occurred. The vessel which had 1,331 passengers and their vehicles on board, was detained by the Piraeus port authority. Following repairs overnight, the port authority permitted the vessel to depart Piraeus on May 6 at 6 a.m. for its scheduled service after a class maintenance certificate was issued. ´

In the morning of Dec 13, the "Nissos Rodos" suffered a mechanical damage at the port of Chios. On board the ferry, serving the route Piraeus-Chios-Mytilene were 238 passengers, 69 trucks, 30 vehicles and 13 motorbikes. Attempts were made to rectify the damage so that the ship could continue on its scheduled route to Mytilene. The "Nissos Rodos" served an extraordinary route to Chios from Piraeus to transfer 235 passengers from Samos island to Mytilene and 40 trucks that had been stuck in Chios since the morning due to the damage to the ship. The ferry left Piraeus at 1 p.m. and was estimated to arrive at 8.30 p.m. in the port of Chios from where she will directly depart to Mytilene. From there, a return sailing to Chios will take place on Dec 14 at 4.30 a.m.