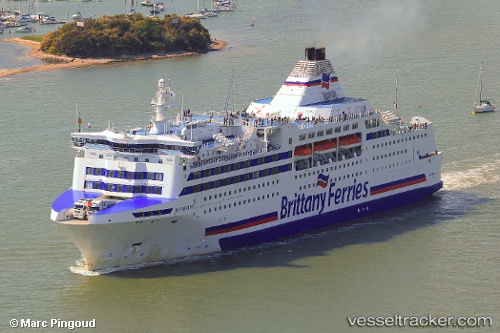 On May 10, 2022, a passenger on the 'Normandie' encountered a health problem before arriving at the port of Ouistreham. The crew contacted the maritime medical consultation center (CCMM) which then got in touch with the CROSS Jobourg. After the establishment of the diagnosis and the recommendation of a medical evacuation, the CROSS contacted the SAMU of Le Havre which deployed a medical team for an urgent transport to the Jacques Monod hospital in Le Havre. The CROSS decided to send the Civil Security Dragon 76 helicopter for the transport of the team on board.

Ferry assisted in rescue of fisherman

On Oct 6, 2021, the CROSS Jobourg was informed by the 'Normandie' that a crew member of the crew of the fishing vessel 'Thieresa' requires a medical evacuation following an accident during shell fishing. The ship was then 25 nautical miles north-west of Le Havre. The CROSS initiated a conference call with the maritime medical consultation cente in Toulouse and the SAMU in Le Havre. A medical evacuation of the sailor was recommended. The Dragon 76 helicopter based in Le Havre was deoloyed with a medical team from Le Havre on board to carry out the evacuation. The sailor was hoisted aboard the Dragon 76 where he received first aid while being transported to the hospital in Le Havre..

On Oct 17, 2020, the 'Normandie' was asked to divert to assess the situation of the 'Almana IV'. At 11:55 a.m. the CROSS Jobourg received a call from a father worried about his daughter and her friend, both of whom had left aboard the 'Almana IV'. The father was monitoring the voyage with a GPS application but had not received a position for two hours then. 20 minutes later, the CROSS broadcast an emergency message. Contact with the girl’s mother was made to get more information about the ship. A new consistent position was received by the GPS application with a sailboat on its way to Boulogne-sur-Mer. Several attempts to contact it by VHF remained unsuccessful. The previous owner of the sailboat was contacted and reported the telephone number of the second person on board. The attempted call also remained unanswered. Several merchant ships and the hydrographic vessel 'La Pérouse' of the French Navy, which was in the area, also made VHF calls without success. The search continued throughout the day. After 6 p.m., while the last GPS positions suggested that the' Almana IV' was adrift, the ferry 'Mont St Michel' reported a sailboat corresponding to the description nine nautical miles behind it. The 'Normandie' , after diverting to the position, in turn spotted the boat and its crew . They were healthy, but reported an engine problem and a water ingress. The boat had to be towed to Fécamp. The towage was carried out by the lifeboat of the local SNSM station which was tasked at 7.40 p.m. In the night of Oct 17 the yacht was safely pulled into the port of Fécamp.