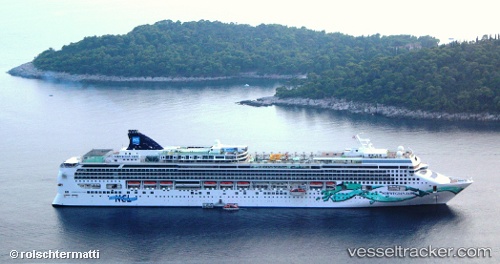 The Port Authority of Thera was informed in the morning of Aug 7, 2021, about the illness of a 43-year-old crew member of the 'Norwegian Jade'. The patient was medevaced by the 'Taxiarchis D' and taken to the port of Athinios, Thira, where he was then picked up by an ambulance and was treated at the General Hospital of Thira.

The Princess Cruise Line has cancelled five departures of the 'Diamond Princess' from Yokohama, the port for Tokyo where it has been stuck for more than two weeks. The cruise line says this is due to the ship’s prolonged quarantine period, and the anticipated time to prepare the ship to return to service. The ship was currently due to return to service on April 29, in time for the start of Japan’s Golden Week celebrations. Cruises have also been cancelled on 'Majestic Princess' all the way up to and including April 2. These included a series of round-trip departures from Keeling, the port for Taipei. Cruises on the 'Sapphire Princess' have been cancelled all the way up to and including Oct 22. These included a whole series of round-trips from Shanghai, and other cruises departing from Singapore, Yokohama and Hong Kong. The 'Sapphire Princess' will redeploy to Australia six months earlier than planned, and 44 new cruises from five major cities will be introduced as new itineraries to replace the cancelled Asia programme. This new year-long programme in Australia will go on sale from Feb 27. All booked guests on cancelled voyages will receive a full refund of their cruise fare, air fares (if booked with Princess), hotel packages, pre-paid shore excursions, along with a future cruise credit. The 'Queen Elizabeth' will no longer cbe alling at Hong Kong on March 31 and Shanghai on April 4, with replacement ports yet to be announced. The 'Queen Mary 2’s voyage from Asia to Australia has been modified with the introduction of the following Australian ports: Darwin on Feb 24-25 and Yorkneys Knob (for Cairns) on Feb 29. After sailing to Airlie Beach, the ship reverts to the original itinerary. Cruise & Maritime Voyages’ 'Columbus' will no longer call at Tianjin (for Beijing) on March 17 or Hong Kong on March 23, which has been replaced by Chan May in Vietnam. Norwegian Cruise Line cancelled the departure of the 'Norwegian Jade' from Singapore on Feb 17. In addition, all sailings in Asia on the 'Norwegian Spirit' have been cancelled from April 15 through to Dec 7. Instead, the newly refurbished ship will set sail on a series of 17-, 20- and 28-day voyages spanning three continents, including departures from Dubai, United Arab Emirates on March 2; and Cape Town, South Africa on March 22, 2020, before homeporting in Piraeus (for Athens) for the first time on April 19. She will then offer a season of seven-day voyages to the Greek islands, Turkey, and Israel through to November 8. Compensation?Passengers have a choice between cancelling and receiving a full refund, or remaining onboard the affected sailing and getting 50 per cent of their cruise fare credited back. After Holland America Line’s 'Westerdam' was diverted to Sihanoukville, Cambodia, arriving on Feb 13, the next voyage was cancelled. As a further precaution, the line has cancelled two further cruises departing on February 29. These are a 14-day Taiwan & Japan sailing, and a 28-day Taiwan, Japan and South Korea itinerary. Compensation? Guests will receive a full refund, and a future cruise credit for 50 per cent of the cruise fare paid.

In the evening of Nov 8, 2019, the Port Authority of Pylos was informed that a 31-year-old crew member of the 'Norwegian Jade' which was 20 miles southwest of Pylos, needed immediate hospital care. Apatrol boat took off the man and transported him safelyto Pylos from where he was taken to the General Hospital of Kalamata.