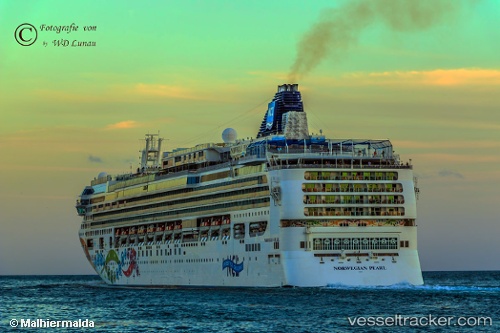 The "Norwegian Pearl" which had suffered a technical issue on July 1, 2019, and had arrived in Civitavecchia on July 14 for repairs, left the port after its completion on July 18 at 3.30 p.m. It arrived in Mykonos on July 21 frm where it continued to Dubrovnik, ETA July 24.

Passenger (cruise) Norwegian Pearl (93530 gt, built 2006), while sailing on a 13-day cruise from Northern Europe to the Mediterranean, experienced a technical issue, which necessitated it to travel at a reduced speed, on Jul 1. The vessel did not call on Palma, Majorca, but instead sailed directly to Barcelona, Spain, where further assessments were made. Due to the need to make necessary repair works, the vessel will be ending the current sailing in Barcelona as well as cancelling the voyage scheduled on Jul 5. Guests who booked the sailing on Jul 5, will receive a 100% refund and a 100% future cruise credit, both on the original cruise fare paid and will also be covered up to $300 in flight change fees.

Norwegian Pearl has embarked on Norwegian Cruise Line’s first-ever homeporting season in Amsterdam, Netherlands. The 2,400-guest cruise ship, which made her European debut in England on 11 May, arrived in Amsterdam for the first time on 8 June. Local officials from the Port of Amsterdam, Amsterdam Cruise Port and Passenger Terminal Amsterdam officially welcomed the ship’s officers and captain Paul von Knorring during a traditional plaque exchange ceremony. Norwegian Pearl’s officers were also presented with the key to the city. “We were very pleased to welcome Norwegian Pearl as her new homeport for the 2019 summer season,” said Alma Prins, commercial manager for cruise at the port.