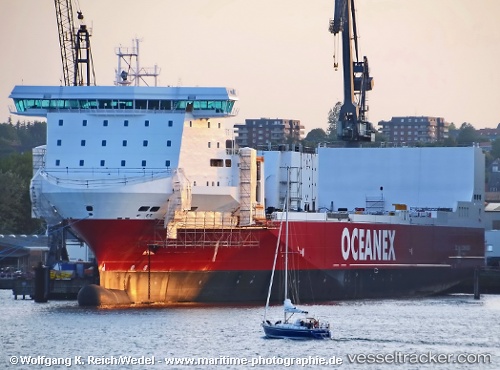 The 'Oceanex Connaigra' suffered a failure of its port side main engine off Neuville, Quebec,in position 46 41 04.4 N, 071 33 57.2 W, on April 2, 2020, around 8 p.m. The ship continued the voyage from St. John's to Montreal on its starboard engine. Repairs were carried out and the ship berthed in Montreal on Aril 3.

On Sep 14, 2015, smoke and flame erupted at Oceanex terminal in St. John's Dock next to the "Oceanex Connaigra". Emergency crews were called to St. John's harbour in the late afternoon, after smoke and flames were seen coming from a piece of equipment in the area. The cause of the smoke came from a crane that was next to the ship. The fire was contained and no injuries were reported. Report with photos: http://www.cbc.ca/news/canada/newfoundland-labrador/smoke-and-flame-seen-at-oceanex-terminal-in-st-john-s-1.3227826