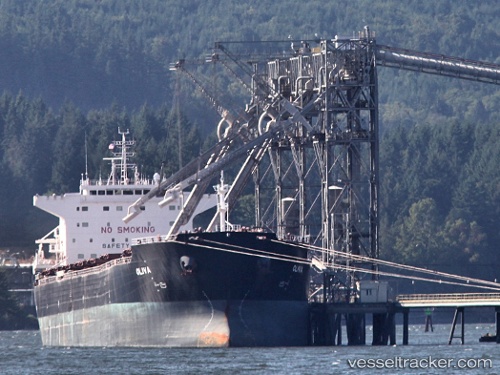 Lifeboat washed up at the Murray

A lifeboat of the "Oliva" has washed ashore in the Cooring wetlands in South Australia after having floated about 8,000 kilometres from Nightingale Island where the bulker broke up on Mar 16, 2011 The boat with its 29 seats and complete with a diesel engine plus a lot of barnacles drifted onto a beach near the mouth of the Murray in South Australia. The ship's crew of 22 had been saved after their ship had run aground en route from Brazil to China. It broke up two days after the accident. A resident from Victor Harbor, just west of the Coorong, spotted the lifeboat when he went fishing and found it in good condition considering its long journey. The seats inside were torn up and the lifejackets were out on the beach down the Coorong so he was not the first person to find it. The South Australian Transport Department was unsure what to do with the 6.8-metre lifeboat. Departmental staff were travelling to the beach near Salt Creek and planned to ensure the boat could not wash back out to sea and become a navigation hazard again. The Transport Department planned to drag it up on shore a bit further so it can’t come adrift and from there we are going to look at if the insurer or owner want it back. If the owners don’t want it back, it could be given to the maritime museum or sold off. Report with photo and video: http://au.news.yahoo.com/latest/a/-/latest/16075234/ghost-boat-washes-up-on-sa-beach/

The "Fairmount Fuji" (IMO: 9156618) departed from Cape Town on Dec 14 and was expected to arrive at Tristan da Cunha on Dec 21, 2011, with a team from Titan Salvage to survey with sonar and ROVs the wreck of the "Oliva". This is the first major survey of the wreck and the cargo which comprised of 65000 tonnes of soya beans.

On Apr 6, Dr. Mark Whittington of ITOPF and Mr. Jean-Luc Dardidon of Le Floch arrived at the grounding site of the "Oliva" aboard the tug "Singapore", have visited Middle & Nightingale Islands to assess the residual oil remaining in the bays and on the rocks. A plan shall shortly be formalised to deal with the remaining oil, and to prevent further impact on the penguin and bird colonies. There are now small conservation teams based on Nightingale and Inaccessible Islands as the Northern Rockhopper penguins complete their moult and return to sea whilst most oiled birds have been transferred to rehabilitation on Tristan da Cunha. The team of three on Nightingale are monitoring the rodent bait stations every two days, and they are holding 63 oiled penguins, to be transferred to Tristan as soon as the weather allows. The team of two on Inaccessible Island are holding only one oiled penguin straggler which will be transported to Tristan soon.