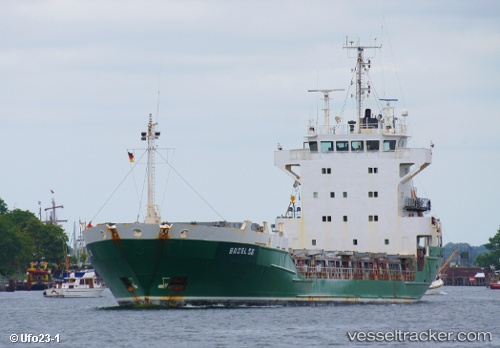 Built to a Livestock Carrier

Ship found without chief and detained

After the "Pallas River" entered the port of Rostock, coming from Szczecin, on Jan 8, 2015, the ship was detained during a control of the crew of the police boat "Warnow" the following day, as the required number of crew members was not met. The ship was ordered to stay in port until this was corrected. The captain stated that his chief had suffered a fracture the previous evening and was being treated in a hospital of the town for at least two weeks. Also there were only copies of some certicates aboard. The master had to pay a safety fine of 633,50 Euro.

Enroute from Halmstad the "Pallas River" with a crew of 10 on board ran onto a marked shoal off Marsteinsboen in Austevoll on Mar 27, 2014, at 9.30 p.m. The lifeboat "Bjarne Kyrkjebø", the pilot boat 108, which had already been underway to retrieve the pilot, a police launch and the Coast Guard vessel "Sortland" were immediately dispatched to the scene. The Coast Guard vessel "Tor" also was called to assist and was on scene at 10.30 p.m. The cargo ship was stuck west of the Marstein l/h and had suffered a gash of at least 3-4 meters length in the double bottom and some ballast water tanks, but there was no water ingress into the cargo holds. Crew members of the "Tor" boarded the vessel for surveys and in order to develop a salvage plan. However, on Mar 28 at 2.10 a.m. the ship refloated with its own engine after ballast water had been shifted from one side to the other. The "Pallas River" proceeded to Bergen, escorteed by the pilot, where it docked at 6.50 a.m. for for further investigation of the damage. The ship was headed to Eikefet to load a cargo of stones when it ran aground. Due to favourable and calm weather the accident could be resolved within short time and without fuel spill. Norwegian reports with photos: http://www.nrk.no/hordaland/skip-gikk-pa-grunn-ved-austevoll-1.11634732 http://www.bt.no/nyheter/lokalt/Skip-pa-grunn-ved-Marstein-fyr-3088222.html http://www.ba.no/nyheter/article7257934.ece http://www.tv2.no/2014/03/27/nyheter/innenriks/5450906 http://www.nrk.no/hordaland/oppretta-undersokingssak-1.11635943