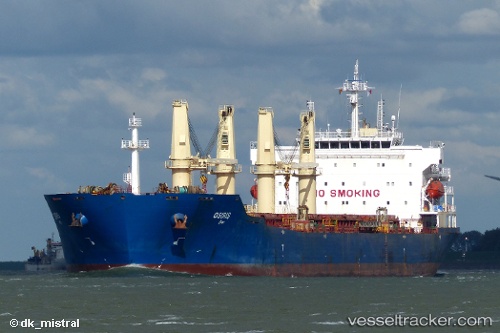 Under tow to San Francisco

USCG said bulk carrier Pacific sea reported breakdown at around 0600 April 22, being disabled and adrift 24 miles west of Bodega Bay, Calif., en route to Stockton, Calif. The vessel's owner contracted with Starlight Marine Services to render assistance and two tugs were dispatched to the scene to tow the vessel. The Coast Guard Cutter Sockeye was also dispatched to the scene to oversee the operation. The vessel is not carrying any cargo, but does have nearly 200,000 gallons of fuel oil on board. The vessel was taken under tow at approximately 2300 April 24 by tugs Millenium Star and Millenium Falcon, at 0100 UTC April 26 convoy was 30 nm NW of San Francisco Bay, ETA 0600 LT April 26. The vessel will be towed to the Port of Oakland where it will undergo repairs and be inspected by the Coast Guard.