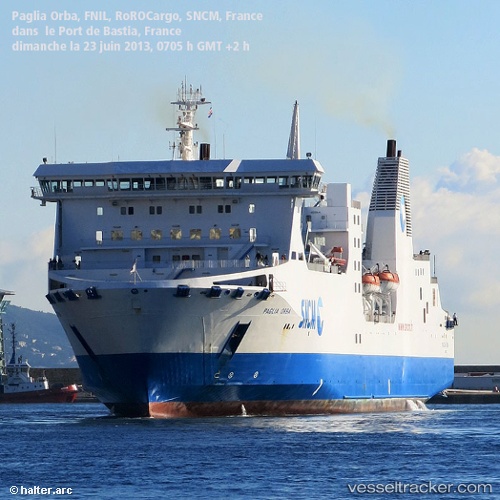 With ABB’s shore connection technology, three Corsica Linea ferries will cut emissions and noise pollution when berthed in the Port of Marseille, France, ABB says in a press release. Instead of running diesel-fueled auxiliary engines, Paglia Orba, Jean Nicoli and Pascal Paoli ferrieswill use electricity for power at berth. Each of the three vessels is being modified to feature ABB’s power compensation solution Dynacomp, which allows electricity available from the local grid in Marseille to be stepped down to 11KV in order to take care of ship power needs while in port. “ABB shore connection technology enables the type of emissions-free ship power that regulators, ports and local residents increasingly demand. With ABB’s proven technology, Paglia Orba, Jean Nicoli and Pascal Paoli will be emissions-free when berthed in Marseille,” said Ludovic Amouroux, Project Manager, Corsica Linea. “We estimate we will use between 7MWh and 11 MWh of zero-emission power per call, depending on the vessel.”

A sick crew member of the "Paglia Orba" was medevaced in the night of Sep 5, 2017, between Ajaccio and Marseille by a helicopter of the Civil Defense. The 40-year-old man had suffered a heart disease. At around 10 p.m. the CROSS Med was alerted and dispatched the helicopter from Corsica with a doctor on board, while the ferry, which was 38 nautical fromport, turned back to meet the Dragon. The crewman was transported to the hospital of Ajaccio at 11:30 p.m.

The "Paglia Orba" suffered a failure of one of the engines on Apr 12, 2016, at 8 a.m. in the Gulf of Porto-Vecchio enroute from Porto-Vecchio to Marseille. At 8:15 am, the CROSS Med in Corsica was informed about the electrical problem which was leading to a loss of the main propulsion. The risk was that the "Paglia Orba" could come dangerously close to the coast and was located about six kilometers off the Corsican coast with 293 people aboard, among them 241 passengers and 52 crew members as well as 173 vehicles. After the propulsion capacity was regained, the ferry was ordered to move away from the coast in an eastward direction to respect a safe distance of 10 miles to the coast to prevent any risk if new engine damage occurred. At the same time, the Maritime Prefecture of the Mediterranean alerted the tug "Altagna" from the port of Bastia, the Altagna, while an assessment and intervention team of the navy was prepositioned on the naval air base Hyères, to be deployed by air in case needed. At 10:30 a.m., the Maritime Prefect for the Mediterranean notified the owner of the "Paglia Orba" to avert any danger to the ship and its passengers. The ship's captain decided to sail to Bastia where a harbour tug could assist, in case of difficulty, for maneuvering in port. At 11:30 a.m. the ferry reported that she had regained much of its propulsion capabilities and continued on to Bastia where it arrived at 4.30 pm. As a precation, she was assisted by the "Altagna". The situation of the ferry was monitored continuously by the CROSS Med in Corsica, the Maritime Prefecture of the Mediterranean, and semaphores located in La Chiapa, and Alistro Sagro. The ferry left Bastia again at 9.30 p.m. and headed to Marseille, ETA Apr 13, 9.30 a.m. French report with photo: http://france3-regions.francetvinfo.fr/corse/haute-corse/bastia/suite-une-avarie-le-paglia-orba-deroute-au-port-de-bastia-973954.html