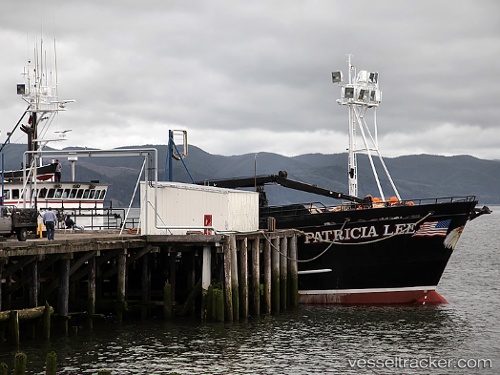 The US Coast Guard medevaced a man from the 'Patricia Lee' on Oct 19, 2021, approximately 200 miles southwest of Dutch Harbor. Watchstanders in the 17th District command center in Juneau received the initial request for the the medevac from the 'Patricia Lee' at about 4 p.m. The master reported a crew member had sustained serious injuries to his pelvic region after becoming pinned by a crab pot about 225 miles west of Dutch Harbor. Command center personnel directed the launch of the Air Station Kodiak helicopter crew from Cold Bay, while the Patricia Lee made way toward Dutch Harbor. A Coast Guard C-130 Hercules aircraft crew and an additional MH-60 Jayhawk aircraft crew were launched from Air Station Kodiak to provide back up. The MH-60 Jayhawk helicopter hoisted the injured fisherman at about 11:50 p.m. He was flown to Dutch Harbor and placed in the care of LifeMed personnel.

A Coast Guard Air Station Kodiak MH-60 Jayhawk helicopter crew medevaced a man from the "Patricia Lee" 190 miles west of Dutch Harbor, Alaska, in the morning of Aug 7, 2018. District 17 command center watchstanders received a report the prevoius evening from the fishing vessel’s master that a crewman had been hit in the head by a crab pot. Due to the man’s injuries, a Coast Guard duty flight surgeon recommended a medevac. District 17 command center directed the launch of two Air Station Kodiak MH-60 aircrews, a Coast Guard corpsman and an HC-130 Hercules aircrew. Due to the distance of the "Patricia Lee"’s position from Kodiak, two Jayhawk aircrews had to be utilized. The first Jayhawk aircrew transited from Kodiak to Cold Bay, then the second Jayhawk aircrew went from Cold Bay to the Patricia Lee to conduct the medevac. The Hercules aircrew provided transportation of the second Jayhawk aircrew and acted as a communications platform for the Jayhawk during the medevac. The helicopter crew safely transported the 27-year-old man from the fishing vessel to awaiting air ambulance personnel in Dutch Harbor for further care. The man was reported to have been in stable condition. The aircrews transited more than 1,200 miles from Kodiak and spent more than 17 hours conducting the medevac. Weather on scene was 5-foot seas and 23 mph winds.

The US Coast Guard medevaced an injured fisherman from the "Patricia Lee" near Dutch Harbor on Aug 20, 2014. Watchstanders at the 17th District command center in Juneau received a request for assistance from the "Patricia Lee" who reported a 27-year-old fisherman suffered an injury to his foot and needed to be medevaced. The duty flight surgeon was contacted and agreed with the decision to medevac the injured fisherman and the helicopter crew was dispatched to the scene.An Air Station Kodiak MH-65 Dolphin helicopter crew deployed aboard Coast Guard Cutter "Alex Haley" safely hoisted and transported the fisherman to awaiting medical services personnel in Dutch Harbor. Weather on scene was reported as 2-foot seas and calm winds.