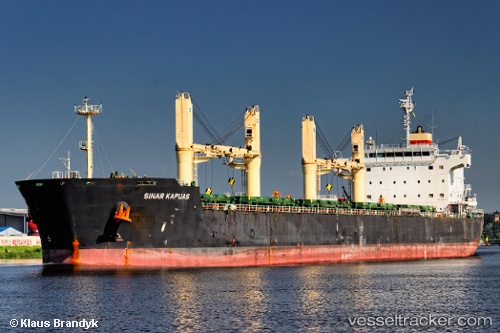 The "Sinar Kapuas", which had been detained at the port of San Lorenzo since November 2018, due to a cargo claim by a local shipper, has been released on April 13, 2019. The vessel left port and headed to Balboa for an intermediate survey, hull cleaning and bunkering with an ETA as of April 17. According to the Samudera Shipping Line said the claim amount has been compromised which falls within the initial estimated financial impact of $1.7m.

Thomson Reuters: An oil tanker and a bulk carrier collided off Singapore on Friday causing some crude oil spillage, the Maritime Port Authority said. A Libyan-registered oil tanker Alyarmouk collided with the Singapore-registered bulk carrier Sinar Kapuas about 11 nautical miles north-east of Pedra Branca, east of Singapore. “Alyarmouk reported that one of her cargo tanks sustained damage, resulting in some spillage of crude oil.” There was no report of injury and traffic in the port and the Strait of Singapore was unaffected, the authority said in a statement. The charterer of the oil tanker and volume of spillage were not immediately clear, MPA said in a telephone call. According to Reuters’ shiptracking tool, Alyarmouk was en route to Yangpu, China, while Sinar Kapuas’s current position was not traceable. The two vessels are currently safely anchored and in stable condition.

An oil tanker collided with a bulk carrier ship in Singapore waters 11 nautical miles, or about 20km, to the north-east of Pedra Branca on Friday morning. The Libyan-registered oil tanker Alyarmouk, which collided into the Singapore-registered carrier ship Sinar Kapuas, sustained damage to one of her cargo tanks. As a result, there was spillage of crude oil. No one was injured in the collision and traffic in the Strait of Singapore remains unaffected. Upon receiving reports of the collision at about 6am, the Maritime and Port Authority of Singapore (MPA) deployed a helicopter to assess the situation. Oil spill response resources were also activated