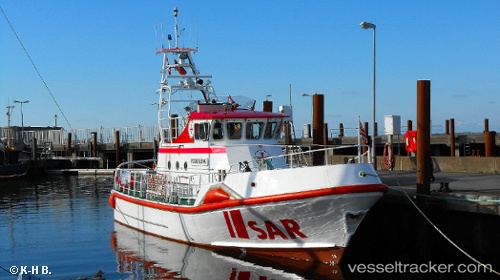 Baby was born aboard lifeboat

In the night of Easter Sunday, April 4, 2021, a child was born on the 'Pidder Lüng' of the List station upon Sylt of the DGzRS. All was well with the young mother, Lara Müller-Maron (25) after her strenuous and exciting night: Her little son Bosse was born at 4.02 a.m. on board the lifeboat. Father Teunis Maron was able to receive his wife unexpectedly with his son that morning on Sylt. He expressly thanked the midwife as well as the paramedics and the crew of the lifeboat for the support and care of his wife and son. They were alerted at 2 a.m. as the heavily pregnant woman from Sylt had to be brought to the mainland. A helicopter couldn't fly. The plan was to hand over the expectant mother to an ambulance in Havneby. From there she should be brought to the hospital in Flensburg. But already on the 25-minute crossing it became clear that there would not be enough time for it. The lifeboat just arrived in Havneby when a healthy boy was born on board. Midwife Cornelia von Böhlen was happy about the good outcome. The child was born well before the due date. Since there is no longer a maternity clinic on Sylt, it is recommended that pregnant women leave the island two weeks before the calculated date, but the time had not yet come. Together with two other midwives, she is available for pregnant women via the midwife emergency number on the island of Sylt. Cornelia von Böhlen was full of praise about the situation on board the lifeboat: "That was a great, calm atmosphere on board." The ambulance from Flensburg, which was already waiting at the port, was no longer needed - mother and child were doing so well that after about an hour they were all able to return to List aboard the lifeboat. Its crew, Holger Speck, Gerhard Reinfeld and Christopher Kölln were also happy that everything went well. "On the way, I had the impression that it wouldn't take long," said coxswain Holger Speck, himself a father of three daughters. A birth on board the boat was exciting for him too. Even if the sea rescuers are generally prepared to deal with medical emergencies on board, births on board are rare. The last time this was almost ten years ago. At that time a boy was born on the lifeboat at the Amrum station. German report with photos: https://www.seenotretter.de/presse/ansicht/news/geburt-an-bord-baby-kommt-auf-seenotrettungskreuzer-pidder-lueng-zur-welt/

On Oct 12, 2015, at 08:03 a.m. the survey ship "Mya 2" allided with the "Pidder Lüng" when entering the port of List upon Sylt. The lifeboat suffered significant damage, but remained seaworthy. The damage was to be repaired during a scheduled yard stay in the near future. Also the "Mya 2" suffered damage. The Water Police Brunsbüttel launched an investigation into the accident.