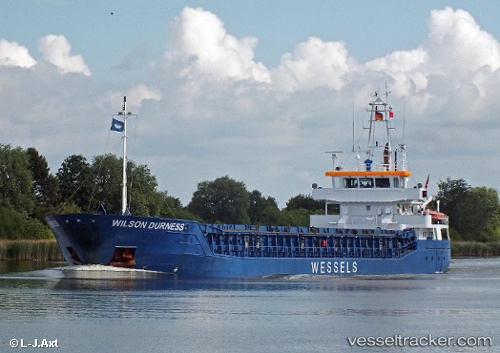 On Jan 23, 2020, the 'Pollux', upon its arrival at the Hönnsäter port in Hällekison the Vänern Lake with a cargo of bentonite from Gibraltar, veerred off the dairway and got stuck with the bow in a clay bank. After a few hours, the Swedish Coast Guard's patrol boat 'KBV 492' arrived on site for an initial assessment of the situation. Later, the Coast Guard vessel 'KBV 051' and the tug 'Lidköping' left the port of Lidköping towards Hällekis. After the tug had arrived, an attempt was made to pull the ship off, but the grounded ship only moved a few meters and remained stuck in the mud. In the afternoon all towing activity had stopped at the moment. A representative of the Swedish Transport Agency was taken out to the ship by the 'KBV 492' and boarded the 'Pollux'. Only after a new attempt to pull off the vessel the tug managed to get it to the quay at 4.35 p.m. On Jan 27 she left the port again and headed to Naestved, DK, with an ETA as of Jan 29. Swedish reports with photos: http://www.hallekis.com/xx200123a.htm https://www.lidkopingsnytt.nu/2020/01/23/lastfartyg-pa-grund-utanfor-hallekis/

The "Pollux" was allowed to resume the voyage on Nov 3 at 10.30 a.m. and continued the canal passage towards its destination Kolding. The ship's bow was dented. Also at the gate suffered significant damage. Under water, the gate has two large dents, and also parts of the lighting were demolished. The lock chamber had to be taken out of service for several hours. At about 10.30 a.m. the gate was sof ar repaired that it could be reopened to ship traffic. German report with photo: http://zeitungen.boyens-medien.de/aktuelle-nachrichten/zeitung/artikel/brunsbuettel-frachter-rammt-schleusentor-1.html More photos: http://nok-schiffsbilder.de/modules/myalbum/photo.php?lid=24393 http://nok-schiffsbilder.de/modules/myalbum/photo.php?lid=24391 http://nok-schiffsbilder.de/modules/myalbum/photo.php?lid=24392

On Nov 3, 2011, at 3.20 a.m. the "Pollux" allided with the inner gate of the small Northern Lock of the Kiel Canal in Brunsbuettel. The damage to the gate was significant and the small lock had to be taken out of operation. The "Pollux" berthed at the railway station pilings in Brunsbuettel for surveys of the damage suffered. Investigators of the police found out that the ship was too fast when entering the lock coming from Ceuta.