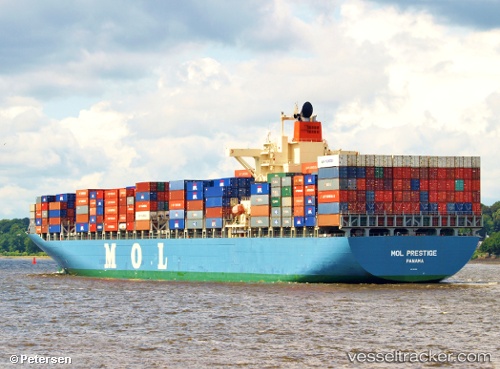 The Transportation Safety Board found out that a fire that broke out in the engine room of the 'Mol Prestige' on Jan 31, 2018, off Haida Gwaii was caused by poor maintenance. Five of the 22 crew members onboard the vessel were seriously hurt in the fire. The board's report said the fire started when cold fuel oil was added into a high temperature tank caused oil to spew from the top and catch fire. It found equipment in the engine room hadn't been maintained as required and even though engine crew had identified hazards, they went unaddressed. The safety board said several other safety issues were also discovered, including evacuation procedures from the engine room, where some crew members were trapped when the fire spread. Since the fire the owner of the vessel has revised its system for inspections, maintenance and completion of tasks.

The "MOL Prestige" was safely moored at the port of Seattle in the afternoon Feb 11, under tow of the US-flagged tug "Denise Foss". So far there has been no word on the extent of damages to the vessel, and an investigation was expected to take place upon its arrival in Seattle to determine whether all the cargo should be discharged. The vessel still only had emergency backup power.

The "MOL Prestige" on Feb 5 was around 207 miles southwest of Haida Gwaii, British Columbia, in position 51 58 55.38N, 136 26 22.38W. The convoy was heading with a speed of 4.3 knots towards Vancouver, where it was expected to arrive on Feb 9. The extent of damage to the engine room was still being assessed.